Each cohort of three patients was administered an increasing dose of GS010 through a single intravitreal injection in the eye most severely affected by the disease. Recruitment was completed in April 2015 and long-term follow-up is ongoing. These patients had an average onset of disease of 6 years at the time of treatment. At baseline, both treated and untreated eyes had an off-chart median visual acuity (1).

The patient group with vision loss for 2 years or less at the time of injection demonstrated a treatment effect in favor of the treated eye of increasing magnitude from week 36 onwards.

Evolution of visual acuity in the treated eye vs. untreated eye at week 78 of follow-up in patients with less than 2 years of vision loss symptoms (in equivalent number of letters read; n=5*) 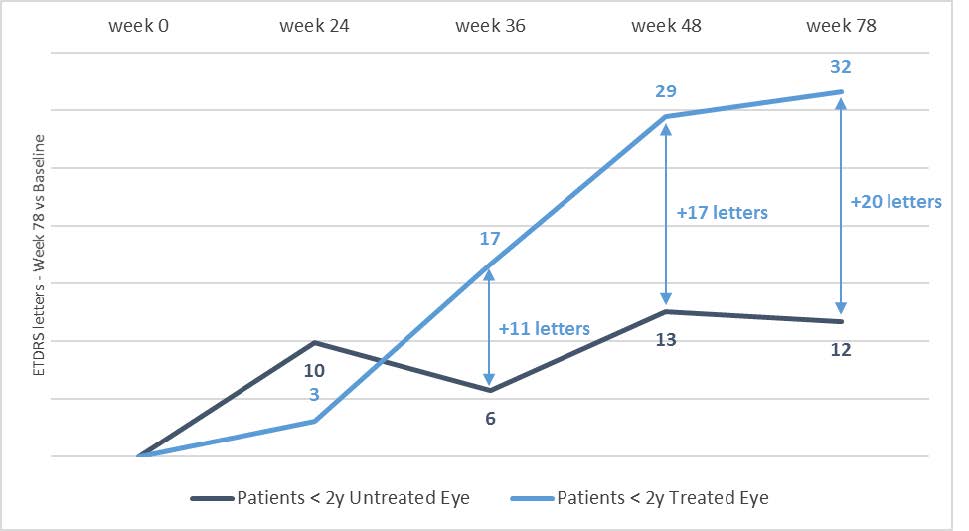 Evolution of visual acuity in the treated eye vs. untreated  eye at week 78 of follow-up in patients  with less than 2 years of vision  loss symptoms (in equivalent number of letters read; n=5*)

Bernard Gilly, CEO and co-founder of GenSight, commented, “We are very encouraged by the latest results indicating a sustainable clinical benefit for patients in this long-term follow up. This data continues to support the design of our two Phase III studies with GS010 for the treatment of Leber’s Hereditary Optic Neuropathy, which are currently ongoing in the U.S. and Europe, addressing patients with an early onset of vision loss. We continue to be thankful for the participation of our clinical trials’ patients and their families, which ultimately will help us find a cure for this devastating condition.”

Dr. Catherine Vignal, investigator of the study and Chief of the Department of Ophthalmology at the Rothschild Foundation Hospital in Paris, added, “The confirmatory trends of week 48 data after 1.5 years of follow-up confirm significant hope for patients suffering from LHON. The insights gained from this and forthcoming data will be tremendously helpful as GenSight works to develop a therapy for this very severe disease with no existing curative treatment.”

GenSight Biologics is currently conducting two Phase III clinical studies (RESCUE and REVERSE) in Europe and the United States to assess the efficacy of GS010 in patients affected with LHON due to the ND4 mutation, with vision loss up to one year at the time of treatment. Recruitment is expected to be completed by Q1 2017 for both studies.

GS010 targets Leber’s Hereditary Optic Neuropathy (LHON), a rare maternally inherited mitochondrial genetic disease, characterized by the degeneration of retinal ganglion cells that results in brutal and irreversible vision loss that can lead to legal blindness, and mainly affects adolescents and young adults. GS010 leverages a mitochondrial targeting sequence (MTS) proprietary technology platform, arising from research works conducted at the Institut de la Vision in Paris, which, when associated with the gene of interest, allows the platform to specifically address defects inside the mitochondria using an AAV vector (Adeno-Associated Virus). The gene of interest is transferred into the cell to be expressed and produces the functional protein, which will then be shuttled to the mitochondria through specific nucleotidic sequences in order to restore the missing or deficient mitochondrial function.