Topline results further highlight the favorable safety and tolerability profile of GS010, and demonstrate a clinically meaningful improvement of +11 ETDRS letters (-0.218 LogMAR) in treated eyes at 48 weeks as compared to baseline in all 37 patients. Unexpectedly, untreated contralateral eyes (treated with a sham injection) show a similar improvement of +11 ETDRS letters (-0.211 LogMAR). Due to this improvement in untreated eyes, the trial did not meet its primary endpoint, defined as a difference of improvement in visual acuity in GS010-treated eyes compared to sham-treated eyes at 48 weeks.

The improvement of visual acuity in sham-treated eyes was unexpected based on the natural history of LHON, for which partial spontaneous recovery is reported in only 8 to 22% of patients with the G11778 ND4 mutation (Lam et al. 2014, Riordan-Eva et al. 1995). “This meaningful improvement of untreated eyes observed at week 48 was totally unexpected given what is known and has been published about the natural history of this devastating disease. We will continue to analyze the data to better understand our results, but they suggest that GS010 benefits both eyes in a way that is still to be understood,” commented Bernard Gilly, Chief Executive Officer of GenSight.

“The fact that structural measures of the retina showed such a large statistical difference with treatment is compelling and objective evidence that this gene therapy protects the integrity of many retinal ganglion cells from the damage of LHON,” commented Pr. José-Alain Sahel, Director of the Institut de la Vision (Sorbonne-Universités/Inserm/CNRS), Paris, Chairman of the Department of Ophthalmology at Centre Hospitalier National d’Ophtalmologie des XV-XX, Paris, Professor and Chairman of the Department of Ophthalmology at University of Pittsburgh School of Medicine and Medical Center, and co-founder of GenSight Biologics.

The graph below shows the mean change from baseline in visual acuity, in both treated (GS010) and untreated (sham) eyes, over time in ETDRS letters: 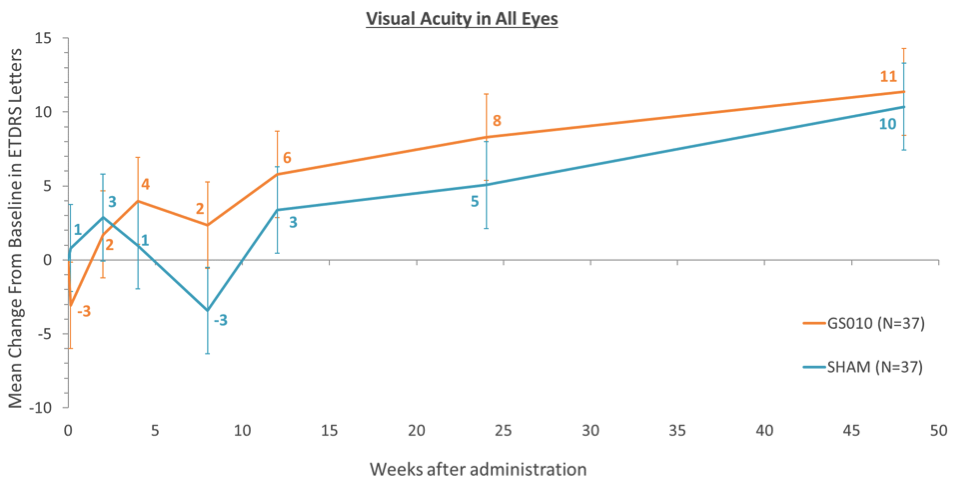 The secondary endpoint of change in thickness of the temporal quadrant and papillomacular bundle of the retinal nerve fiber layer from baseline to week 48 demonstrated a large statistically significant difference (p = 0.0359) between all GS010-treated eyes and all sham-treated eyes, with untreated eyes showing a loss of 3.4 μm while treated eyes showed a limited loss of 0.6 μm.

“Preliminary optical coherence tomography [OCT] results from the REVERSE trial indicate that the biological targets of the mitochondrial DNA gene therapy have been successfully engaged in the treated eye compared to the untreated eye. The bottom line: we have excellent news for LHON patients and their families about their vision, which is remarkable for a previously untreatable disease,” commented Dr. Robert C. Sergott, Director, Wills Eye Hospital, Neuro-Ophthalmology and Director, William H. Annesley, Jr, EyeBrain Center, Thomas Jefferson University, Philadelphia, PA.

Based on preliminary analysis of the safety data, GS010 was well tolerated after 48 weeks. The ocular adverse events most frequently reported in the therapy group were mainly related to the injection procedure, except for the occurrence of intraocular inflammation (accompanied by elevation of intraocular pressure in some patients) that is likely related to GS010, and which was responsive to conventional treatment and without sequelae. There were no withdrawals from the trial.

A full assessment of the data is ongoing, and detailed results are expected be presented at a major upcoming medical meeting.

GS010 is currently being investigated in two additional ongoing Phase III trials, RESCUE and REFLECT, while patients in REVERSE continue to be followed for another 4 years. RESCUE is a randomized, double-masked, sham-controlled Phase III trial designed to evaluate the safety and efficacy of a single intravitreal injection of GS010 in subjects affected by LHON with < 6 months of onset of vision loss. GenSight expects to report topline data for RESCUE in the third quarter of 2018. REFLECT is a randomized, double-masked, placebo-controlled Phase III trial evaluating the safety and efficacy of bilateral injections of GS010 in patients with < 1 year of onset of vision loss in LHON. The first patient in REFLECT was treated in March 2018.

Leber Hereditary Optic Neuropathy (LHON) is a rare maternally inherited mitochondrial genetic disease, characterized by the degeneration of retinal ganglion cells that results in brutal and irreversible vision loss that can lead to legal blindness, and mainly affects adolescents and young adults. LHON is associated with painless, sudden loss of central vision in the 1st eye, with the 2nd eye sequentially impaired. It is a symmetric disease with poor functional visual recovery. 97% of patients have bilateral involvement at less than one year of onset of vision loss, and in 25% of cases, vision loss occurs in both eyes simultaneously. The estimated incidence of LHON is approximately 1,400 to 1,500 new patients who lose their sight every year in the United States and Europe

The primary endpoint will measure the difference in efficacy of GS010 in treated eyes compared to sham-treated eyes based on Best Corrected Visual Acuity (BCVA), as measured with the ETDRS at 48 weeks post-injection. The patients’ LogMAR (Logarithm of the Minimal Angle of Resolution) scores, which are derived from the number of letters patients read on the ETDRS chart, will be used for statistical purposes. Both trials have been adequately powered to evaluate a clinically relevant difference of at least 15 ETDRS letters between treated and untreated eyes adjusted to baseline.

The trials are conducted in parallel, in 37 subjects for REVERSE and 39 subjects for RESCUE, in 7 centers across the United States, the UK, France, Germany and Italy. Topline results of RESCUE at 48 weeks are expected in Q3 2018.

The trial is planned to enroll 90 patients with an onset of vision loss up to 1 year in duration, and will be conducted in multiple centers in Europe and in the US.