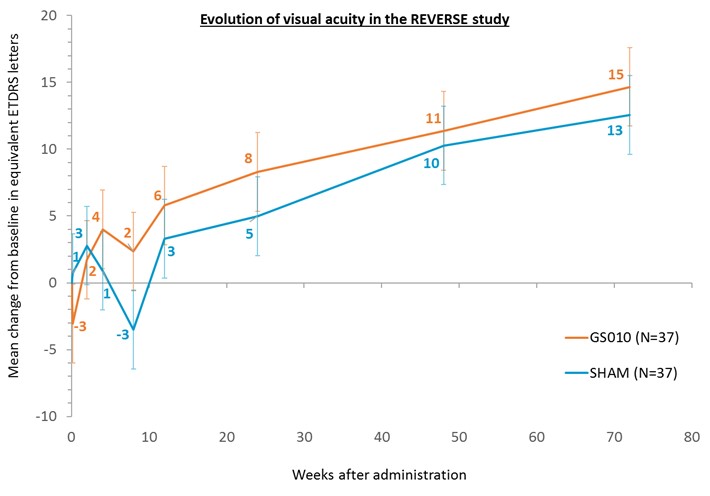 At 72 weeks, a clinically meaningful improvement from baseline in mean visual acuity of +15 letters
(-0.294 LogMAR) was observed in GS010-treated eyes, with concomitant contralateral improvement of +12 letters (-0.246 LogMAR)[1] in sham-treated eyes. This improvement, which extends the positive trend that had been reported at Week 48, points to a sustained functional outcome for the trial subjects.

Continued improvement was also observed in contrast sensitivity as determined by Pelli-Robson low-contrast testing. At 72 weeks, GS010-treated eyes and sham-treated eyes gained on average +0.21 LogCS and +0.15 LogCS versus baseline, respectively. The proportion of treated eyes that achieved a clinically meaningful improvement of at least 0.3 LogCS (45.9%) was statistically significantly higher than that of sham-treated eyes (24.3%; p=0.0047).

The visual function outcomes were accompanied by evidence that GS010 was engaging its anatomic targets, the ganglion cells. At 72 weeks, high-resolution Spectral-Domain Optical Coherence Tomography (SD-OCT) objectively demonstrated sustained preservation of the retina anatomy relevant to LHON in GS010-treated eyes. The ganglion cell layer macular volume was preserved (+0.000 mm3) in treated eyes, while sham-treated eyes deteriorated from baseline (-0.044 mm3). The difference was statistically significant (p=0.0060). Drug-treated eyes also showed a limited loss in thickness of the temporal quadrant of the retinal fiber layer of -1.6 µm, compared to a loss of -3.6 µm in sham-treated eyes (p=0.0521).

“The level of sustained improvement in both visual acuity and low-contrast sensitivity, and the sustained preservation of retinal ganglion cells on OCT, at this stage of disease progression is very encouraging, and is a departure from what has been observed and reported on the natural history of LHON,” commented Dr. Mark L. Moster, Neuro-Ophthalmology, Wills Eye Hospital, Professor of Neurology and Ophthalmology at Thomas Jefferson University, Philadelphia, PA, and Principal Investigator in REVERSE and RESCUE trials.

“We’re seeing visual function continue to improve one and a half years after eyes are treated with GS010, and at the same time, objective tests continue to establish neuroprotection of the retina in treated eyes. This is, beyond any doubt, a great benefit for patients and their families,” commented Bernard Gilly, Co-founder and Chief Executive Officer of GenSight. “These results strengthen our determination to work with regulatory agencies to bring GS010 to market within our defined timelines.”

As per protocol, all 37 subjects will be evaluated again at 96 weeks, and data will be reported in the second quarter of 2019.

Topline 48-week data for RESCUE, the second Phase III clinical trial of GS010 in the treatment of LHON, is expected in early Q1 2019.

The primary endpoint will measure the difference in efficacy of GS010 in treated eyes compared to sham-treated eyes based on Best Corrected Visual Acuity (BCVA), as measured with the ETDRS at 48 weeks post-injection. The patients’ LogMAR (Logarithm of the Minimal Angle of Resolution) scores, which are derived from the number of letters patients read on the ETDRS chart, will be used for statistical purposes. Both trials have been adequately powered to evaluate a clinically relevant difference of at least 15 ETDRS letters between treated and sham-treated eyes adjusted to baseline.

The trials are conducted in parallel, in 37 subjects for REVERSE and 39 subjects for RESCUE, in 7 centers across the United States, the UK, France, Germany and Italy. Topline results of RESCUE at 48 weeks are expected in early Q1 2019.