Paris, France, February 4, 2019, 7:30 a.m. CET – GenSight Biologics (Euronext: SIGHT, ISIN: FR0013183985, PEA-PME eligible), a biopharma company focused on discovering and developing innovative gene therapies for retinal neurodegenerative diseases and central nervous system disorders, today announced results from the first scheduled readout, at Week 48, of the RESCUE Phase III clinical trial evaluating the safety and efficacy of a single intravitreal injection of GS010 (rAAV2/2-ND4) in 39 subjects whose visual loss due to 11778-ND4 Leber Hereditary Optic Neuropathy (LHON) occurred up to 6 months prior to study treatment. These subjects received GS010 in one eye and a sham injection in the other eye, with drug treatment randomized between best- and worst-affected eyes.

Figure 1. Illustration of the progression of visual acuity in RESCUE 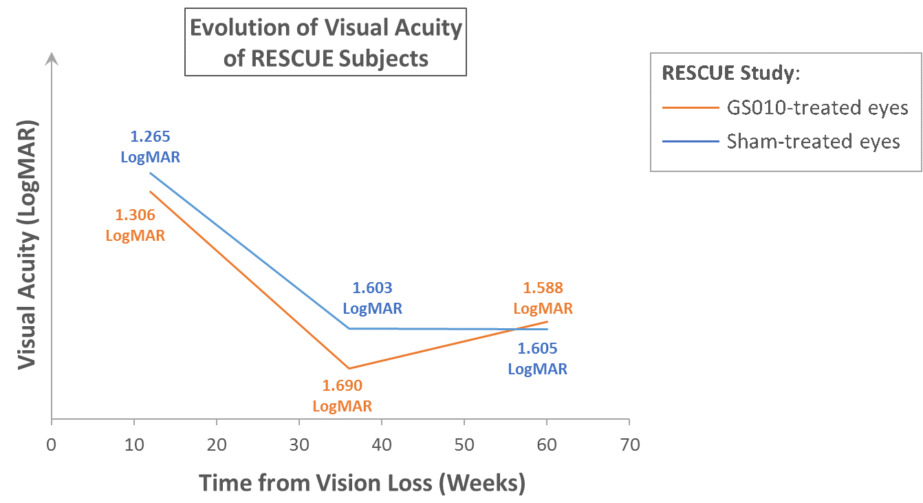 “The powerful and rapid degeneration of neurons early in the disease, combined with the time needed for GS010 to cause functioning proteins to be expressed, may be confounding efficacy measurements early in the active progression phase,” noted Dr. José-Alain Sahel, Director of the Institut de la Vision (Sorbonne-Université/Inserm/CNRS), Paris; Chairman of the Department of Ophthalmology at Centre Hospitalier National d’Ophtalmologie des XV-XX, Paris; Professor and Chairman of the Department of Ophthalmology at University of Pittsburgh School of Medicine and UPMC (University of Pittsburgh Medical Center); and co-founder of GenSight.

Dr. Barrett Katz, Chief Medical Officer of GenSight, added “In our REVERSE trial, which included patients with vision loss between 6 and 12 months prior to treatment, we saw more improvement in both anatomic measures and visual functions as the disease entered its chronic phase. The planned readouts of RESCUE data at Weeks 72 and 96 should confirm GS010’s efficacy.”

Figure 2. Illustration of the coherence between RESCUE and REVERSE 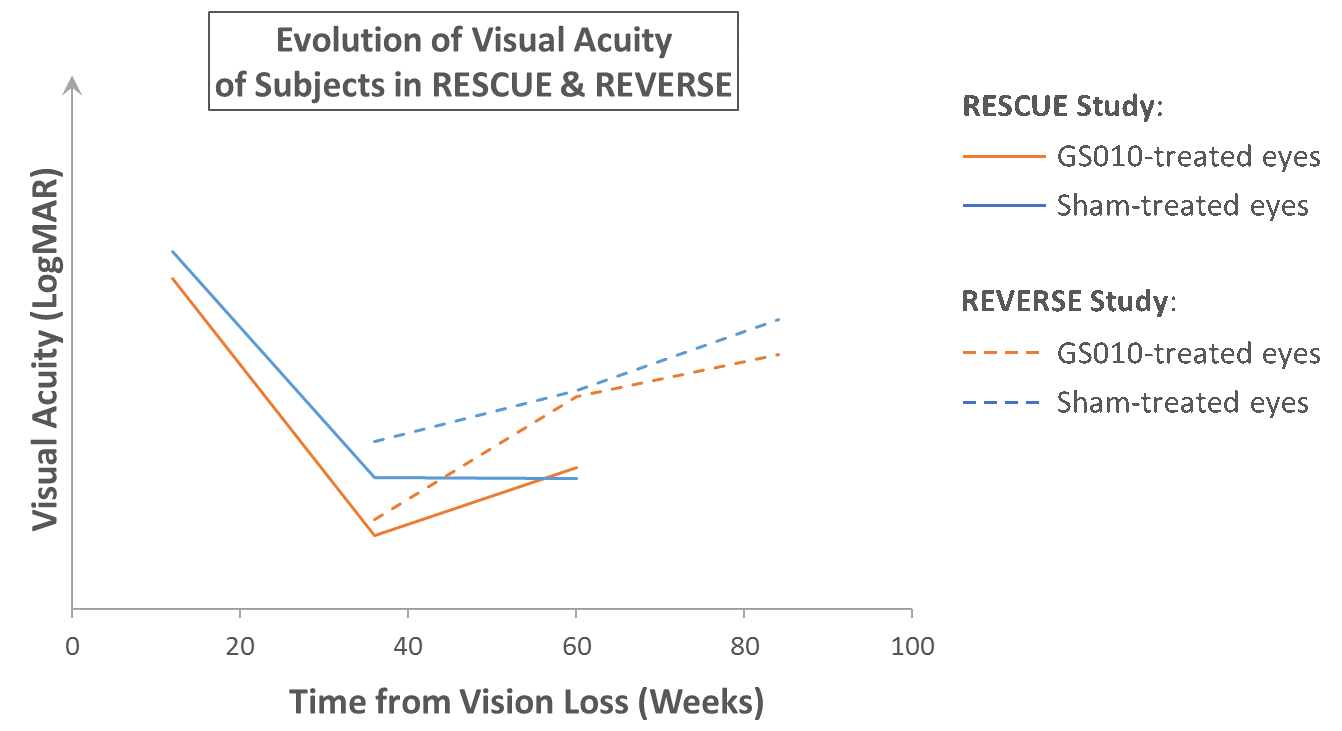 “As expected, the RESCUE results at Week 48 present a more complex picture because of the intense, brutal and extremely rapid onset of the retinal ganglion cells’ degeneration.” said Bernard Gilly, Co-founder and Chief Executive Officer of GenSight. “But as with REVERSE, later readouts are likely to confirm our confidence in the efficacy of GS010. We eagerly await these upcoming readouts, even as we prepare to discuss the results with the relevant authorities. We remain committed to bringing GS010 as early as possible to the market so that LHON patients can have an effective treatment for their relentlessly blinding disease.”

Based on preliminary analysis of the safety data, GS010 was well-tolerated through 48 weeks. There were no serious ocular adverse events or discontinuations due to ocular issues. The most frequently seen ocular adverse events were related to the injection procedure itself. Transient elevations of intraocular pressure were occasionally seen but were thought secondary to intraocular inflammation and thought likely due to administration of GS010. Such episodes were without sequelae and responded to conventional treatment. There were no systemic serious adverse events or discontinuations related to study treatment or study procedure.

The third interventional study for GS010, REFLECT, is a randomized, double-masked, placebo-controlled Phase III trial evaluating the safety and efficacy of bilateral injections of GS010 in patients up to one year from onset of vision loss due to LHON. The first patient in REFLECT was treated in March 2018.

The secondary endpoints will involve the application of the primary analysis to best‑seeing eyes that received GS010 compared to those receiving sham, and to worse‑seeing eyes that received GS010 compared to those that received sham. Additionally, a categorical evaluation with a responder analysis will be evaluated, including the proportion of patients who maintain vision (< ETDRS 15L loss), the proportion of patients who gain 15 ETDRS letters from baseline and the proportion of patients with Snellen acuity of >20/200. Complementary vision metrics will include automated visual fields, optical coherence tomography, and color and contrast sensitivity, in addition to quality of life scales, bio‑dissemination and the time course of immune response. By protocol, readouts for these endpoints are at 48, 72 and 96 weeks after injection.