Paris, France, April 17, 2019, 7:30 a.m. CET – GenSight Biologics (Euronext: SIGHT, ISIN: FR0013183985, PEA-PME eligible), a biopharma company focused on discovering and developing innovative gene therapies for retinal neurodegenerative diseases and central nervous system disorders, today announced results from the second scheduled readout, at Week 72, of the RESCUE Phase III clinical trial evaluating the safety and efficacy of a single intravitreal injection of GS010 (rAAV2/2-ND4) in 39 subjects whose visual loss due to 11778-ND4 Leber Hereditary Optic Neuropathy (LHON) occurred up to 6 months prior to study treatment. These subjects received GS010 in one eye and a sham injection in the other eye, with drug treatment randomized between best- and worst-affected eyes. 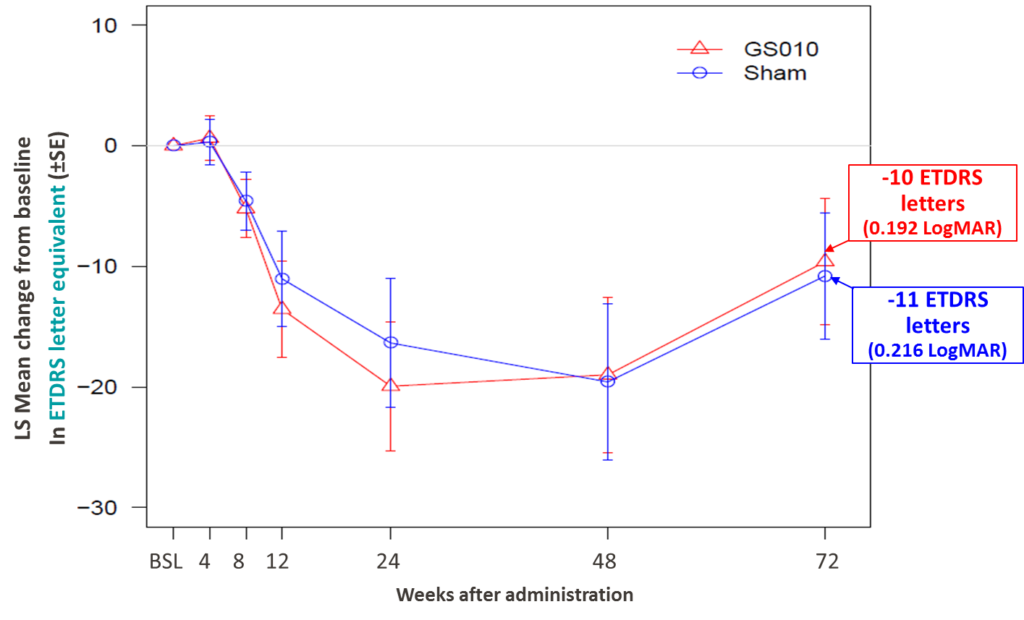 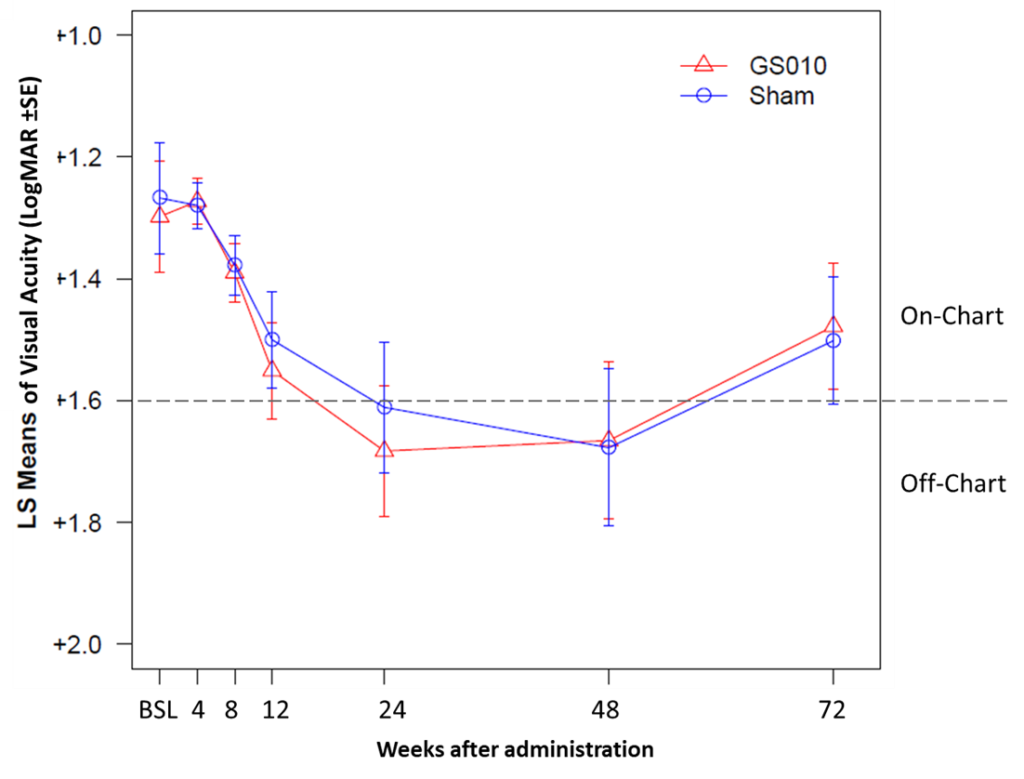 Note: *As per Statistical Analysis Plan (SAP), nadir was defined as the lowest post-treatment LogMAR value up to week of interest. Light Perception/No Light Perception, or LP/NLP, vision was not included in the analysis.

Contrast sensitivity (CS), a second visual function, evolved in a manner similar to BCVA: while values for GS010-treated eyes and sham-treated eyes remained below baseline, CS also recovered so that the gap to baseline diminished at Week 72 compared to Week 48. The two sets of eyes closely matched each other, so that the difference between their CS values was not statistically significant. 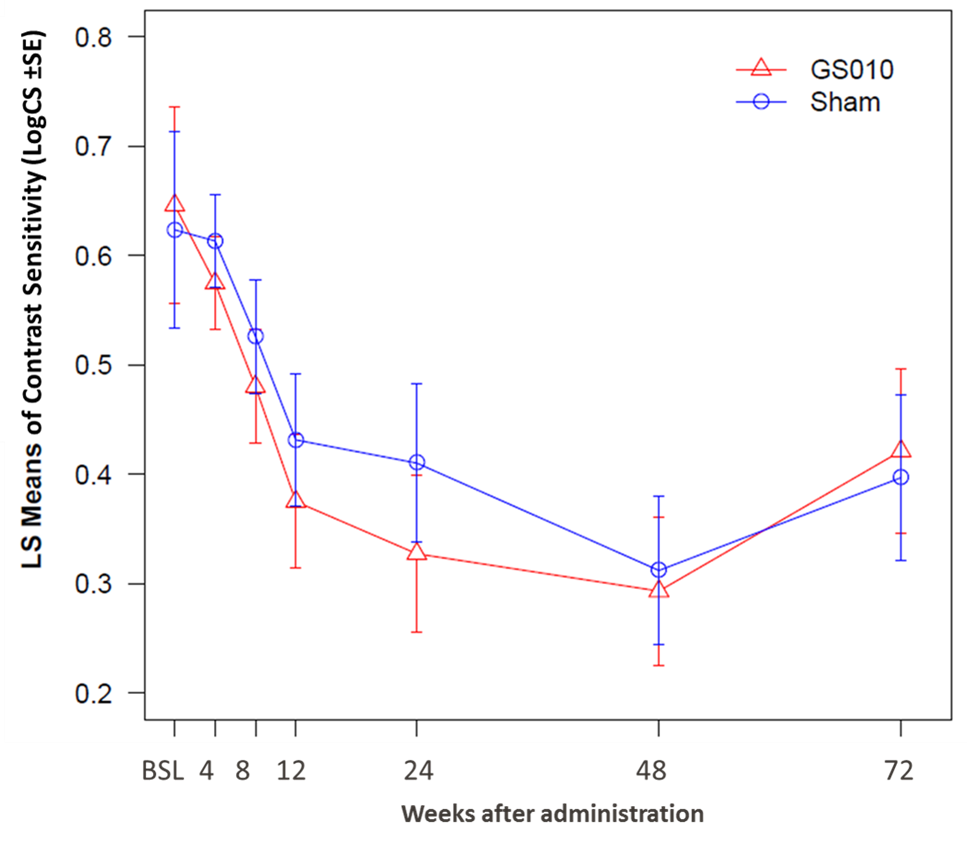 Note: A mixed model of analysis of covariance (ANCOVA) was used with change from baseline at week 72 as the response.

“This improvement in visual function from Week 48 to Week 72, both in visual acuity and contrast sensitivity, strengthens our belief in the benefits of GS010, looking at the shift of the mean BCVA from off-chart to on-chart at Week 72. These results show a more favorable trend than the outcome we usually observe in clinical practice for LHON ND4 patients,” commented Dr. Catherine Vignal, Head of the department of Neuro-Ophthalmology at the Rothschild Foundation, and Principal Investigator at the Department of Ophthalmology at Centre Hospitalier National d’Ophtalmologie des XV-XX, Paris.

One difference between results from the REVERSE and RESCUE trials of GS010 lies in anatomic findings. The data so far do not indicate differential protection for the anatomy of GS010-treated eyes: in both drug-treated and sham-treated eyes, the relevant anatomy, as shown by various OCT measurements (tRNFL thickness, PMB thickness, GCL volume), continued to thin at Week 72, although the rate of thinning decreased between Week 48 and Week 72. Among the OCT measures in the trial at Week 72, the ETDRS macular volume showed a difference between GS010-treated and sham-treated eyes (0.096 mm3, p = 0.0012).

“By design, the population in Rescue is very heterogeneous, and the structure of their retina is also highly variable, from marked atrophy of nerve fibers to edema.  At unmasking, which happens after week 96, we will separate our subjects by their baseline OCT findings. In the sub-group with edema, thinning over time will be a good finding.  In those with baseline atrophy of nerve fibers, increases in thickness will be a good sign. This mix of OCT findings at entry masks the true OCT findings at week 72 in Rescue,” commented Dr. Robert C. Sergott, Director, Wills Eye Hospital, Neuro-Ophthalmology and Director, William H. Annesley, Jr, EyeBrain Center, Thomas Jefferson University, Philadelphia, PA.

Based on preliminary analysis of the safety data, GS010 was well-tolerated through 72 weeks. There were no serious ocular adverse events or discontinuations due to ocular issues. The most frequently seen ocular adverse events were related to the injection procedure itself. Transient elevations of intraocular pressure were occasionally seen but secondary to intraocular inflammation likely due to administration of GS010. Such episodes were without sequelae and responded to conventional treatment. There were no systemic serious adverse events or discontinuations related to study treatment or study procedure.

“We are excited and extremely gratified to see a picture of a sustained recovery of visual function emerge from RESCUE results at Week 72,” said Bernard Gilly, Co-founder and Chief Executive Officer of GenSight. “The findings continue to be consistent with what was observed in REVERSE at 48 and 72 weeks as well as with RESCUE at 48 weeks, and bolster our confidence in the benefits that GS010 can deliver to patients and motivate us to work with the authorities to bring GS010 as early as possible to the market.”

RESCUE subjects will be evaluated again at 96 weeks, and then data will be unmasked, allowing more detailed subject-level analyses to be conducted.  Results from RESCUE at Week 96 are expected to be available by the end of Q3 2019. Week 96 data from the REVERSE trial are expected earlier, in May 2019.

The third interventional study for GS010, REFLECT, is a randomized, double-masked, placebo-controlled Phase III trial evaluating the safety and efficacy of bilateral injections of GS010 in patients up to one year from onset of vision loss due to LHON. The first patient in REFLECT was treated in March 2018.

The secondary endpoints will involve the application of the primary analysis to best‑seeing eyes that received GS010 compared to those receiving sham, and to worse‑seeing eyes that received GS010 compared to those that received sham. Additionally, a categorical evaluation with a responder analysis will be evaluated, including the proportion of patients who maintain vision (< ETDRS 15L loss), the proportion of patients who gain 15 ETDRS letters from baseline and the proportion of patients with Snellen acuity of >20/200. Complementary vision metrics will include automated visual fields, optical coherence tomography, and color and contrast sensitivity, in addition to quality of life scales, bio‑dissemination and the time course of immune response. By protocol, readouts for these endpoints are at 48, 72 and 96 weeks after injection.

The trials are conducted in parallel, with 37 subjects for REVERSE and 39 subjects for RESCUE, in 7 centers across the United States, the UK, France, Germany and Italy. Week 96 results are expected in 2019 for both trials, after which patients will be transferred to a long-term follow-up study that will last for three years.