Paris, France, Wednesday, May 15, 2019, 7.30 am CEST – GenSight Biologics (Euronext: SIGHT, ISIN: FR0013183985, PEA-PME eligible), a biopharma company focused on discovering and developing innovative gene therapies for retinal neurodegenerative diseases and central nervous system disorders, today reported a first set of results from Week 96 of the REVERSE Phase III clinical trial. The trial evaluated the safety and efficacy of a single intravitreal injection of GS010 (rAAV2/2-ND4) in 37 subjects whose visual loss due to 11778-ND4 Leber Hereditary Optic Neuropathy (LHON) commenced between 6 and 12 months prior to study treatment. Week 96 is the last of the scheduled readouts for the trial and marks the time when the data are unmasked, providing access to individual patient profiles.

The results point to continued efficacy of GS010 two years past injection, with best-corrected visual acuity (BCVA) sustaining a clinically meaningful improvement over baseline. At Week 96, GS010-treated eyes showed a mean improvement of -0.308 LogMAR compared to baseline, equivalent to +15.4 ETDRS letters or 3 lines on the ETDRS vision chart. This clinically meaningful level of improvement in visual acuity maintains the gain observed at Week 72 (+14.7 ETDRS letters equivalent). 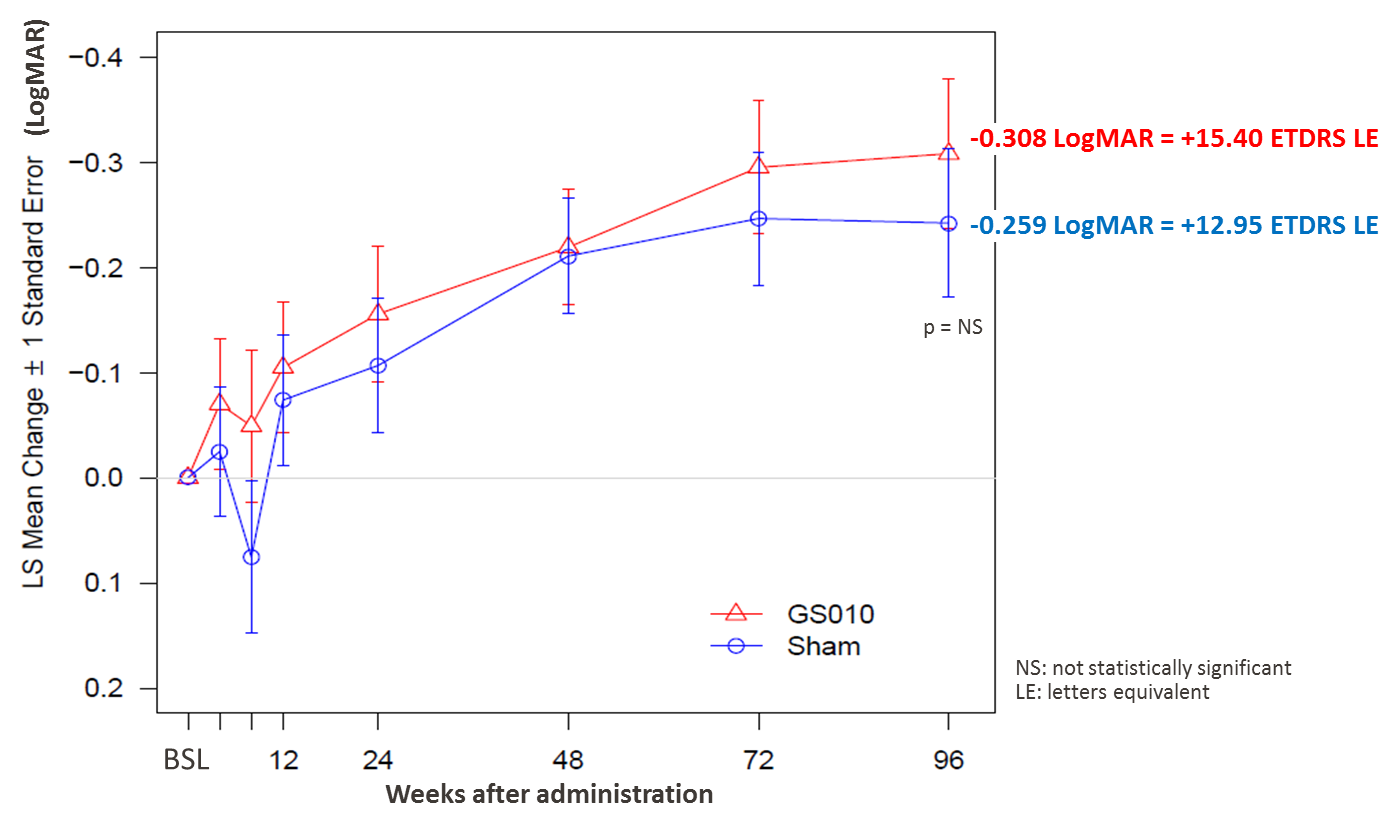 Notes: A mixed model of analysis of covariance (ANCOVA) was used with change from baseline as the response, and subject, eyes of the subject as random factor, treatment and the baseline LogMAR value as covariates in the model.

As in RESCUE and consistent with natural history, subjects experienced an initial point of low visual acuity, or nadir. Eyes of REVERSE subjects recovered impressively. By week 96, GS010-treated eyes had gained +28 more letters relative to their nadir.

Table 1. Recovery of BCVA from Nadir*: RESCUE and REVERSE

Note: *Nadir was defined as the lowest post-treatment BCVA as measured by LogMAR up to week of interest. Light Perception/No Light Perception, or LP/NLP, vision was not included in the analysis. **Change from nadir was first calculated using observed LogMAR values; no data were imputed. The LogMAR values were then converted to the corresponding ETDRS letters equivalent.

At Week 96, a second key visual function – low-contrast visual acuity, as measured on the Pelli-Robson chart – showed a similar trend of improvement for both GS010-treated eyes and sham-treated eyes. 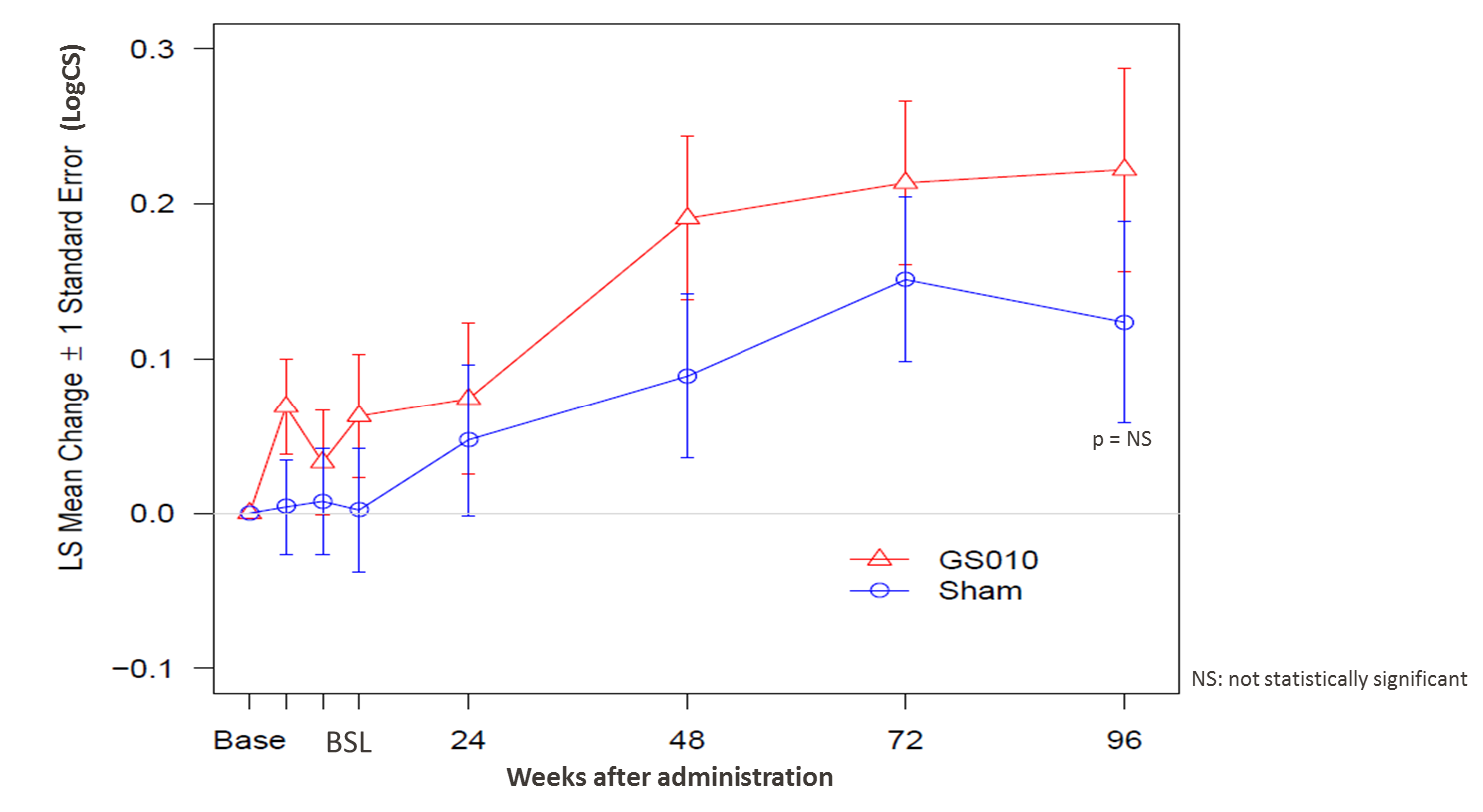 Note: An analysis of covariance (ANCOVA), with repeated measures for eye and covariate adjustment for baseline LogCS, was used to model the effect of treatment on change in LogCS from baseline. A separate analysis was performed at each time point.

“The data show that both the treated and the sham eye improved in both high and low contrast, defying the accepted natural history of this disease and improving upon it, based upon the clinical experiences of generations of neuro-ophthalmologists,” commented Dr. Robert C. Sergott, Director, Wills Eye Hospital, Neuro-Ophthalmology and Director, William H. Annesley, Jr, EyeBrain Center, Thomas Jefferson University, Philadelphia, PA. “The behavior of the untreated eye must also make us re-examine what we thought we knew as possibly dogma and be open to the idea that gene therapy delivered into one eye may be able to access the contralateral eye.”

“It is encouraging that GS010-treated eyes were nearly four times more likely to achieve vision better than 20/200 compared with sham eyes.  The next step, which is to analyze individual longitudinal data on the visual parameters for each subject recruited into REVERSE, should further clarify the therapeutic benefit of GS010 in 11778-ND4 LHON,” noted Dr. Patrick Yu-Wai Man, Senior Lecturer and Honorary Consultant Ophthalmologist at the University of Cambridge, Moorfields Eye Hospital, and the UCL Institute of Ophthalmology, London, United Kingdom.

Another responder analysis provides a useful perspective on the REVERSE results. In a natural history study conducted by Santhera1, 15% of subjects who had the 11778A mutation achieved the following definition of spontaneous “clinically relevant recovery” (CRR) from baseline in at least one eye:

Improvements in visual function were reflected in quality of life scores in the National Eye Institute Visual Function Questionnaire-25 (NEI VFQ-25) survey, a validated, vision-specific quality-of-life instrument completed by REVERSE subjects. Mean composite score and means of relevant sub-scale scores continued to improve over baseline, particularly for the ability to carry out near and distance activities. The increase over baseline of the mean sub-scale scores exceeded those that have been associated with a 15-letter improvement in BCVA in other ocular diseases.

**The composite score is an average of the vision-targeted sub-scale scores, excluding the general health rating question.

Week 96 data further establish the favorable safety profile of GS010. There have been no discontinuations in the trial and no serious adverse effects in GS010-treated eyes. The ocular AEs most frequently reported in the therapy group were mainly related to the injection procedure itself, along with the occurrence of intraocular inflammation (accompanied by elevation of intraocular pressure in some patients), likely related to GS010; these were responsive to conventional treatment and were without sequelae.

“We are very gratified by these remarkable findings, which demonstrate the durable and clinically meaningful impact of GS010, while continuing to establish the safety of our gene therapy,” commented Bernard Gilly, Co-founder and Chief Executive Officer of GenSight. “We are moving with speed and determination to build a compelling dossier from the results of REVERSE and, later this year, RESCUE.”

REVERSE Week 96 results will be included in the briefing materials that are being prepared for a pre-submission meeting with the EMA and a Type B meeting with the FDA, both of which are planned for mid-year.

Data from the 96-week readout of the second Phase III trial for GS010, RESCUE, is expected to be available by the end of Q3 2019.

The third interventional study for GS010, REFLECT, is a randomized, double-masked, placebo-controlled Phase III trial evaluating the safety and efficacy of bilateral injections of GS010 in patients up to one year from onset of vision loss due to LHON. The first patient in REFLECT was treated in March 2018; treatment of the last patient is expected in Q2 of this year.