Dr. Donahue set up the morning’s discussion by providing an overview of LHON as a genetic disease. Dr. Moster then critically examined the literature on how vision changes after loss, over the natural history of the disease. Dr. Moster highlighted differences in the population studied, in terms of causative mutations, and date of onset in past studies. His analyses, which attempted to account for the factors above, indicate a “huge difference” between the results seen in the REVERSE trial and the outcomes cited in the medical literature.

Just as important, his clinical experience as well as that of his peers are at odds with the sustained improvements observed in REVERSE. “We simply do not see the kinds of improvement in our clinical practices when we follow these patients as have been seen in this trial,” Dr. Moster concluded. He reminded the audience that REVERSE subjects had the most severe mutation in terms of rate of spontaneous recovery.

The visual deterioration has profound effects on patients’ lives, Andy Marks explained. He described having to give up a house that he had just purchased when he experienced visual loss from LHON, and moving his residence closer to his office as he adjusted to a lower level of autonomy. Eventually, he moved from Orlando to the New York City metropolitan area, where his inability to drive would be less decisive for his work life. In the community of LHON patients in which he actively participates, he has yet to encounter someone whose visual functions recovered to the degree observed in the REVERSE trial after disease onset.

“We are living in an age of remarkable gene therapies,” said Dr. Sergott, who reviewed the REVERSE study’s key findings. Among the efficacy findings, he highlighted the recovery of visual acuity – +15 ETDRS letters equivalent improvement versus baseline and +28 ETDRS letters equivalent improvement versus nadir for GS010-treated eyes (+13 and +23, respectively, for sham-treated eyes) –  as “extraordinary”. 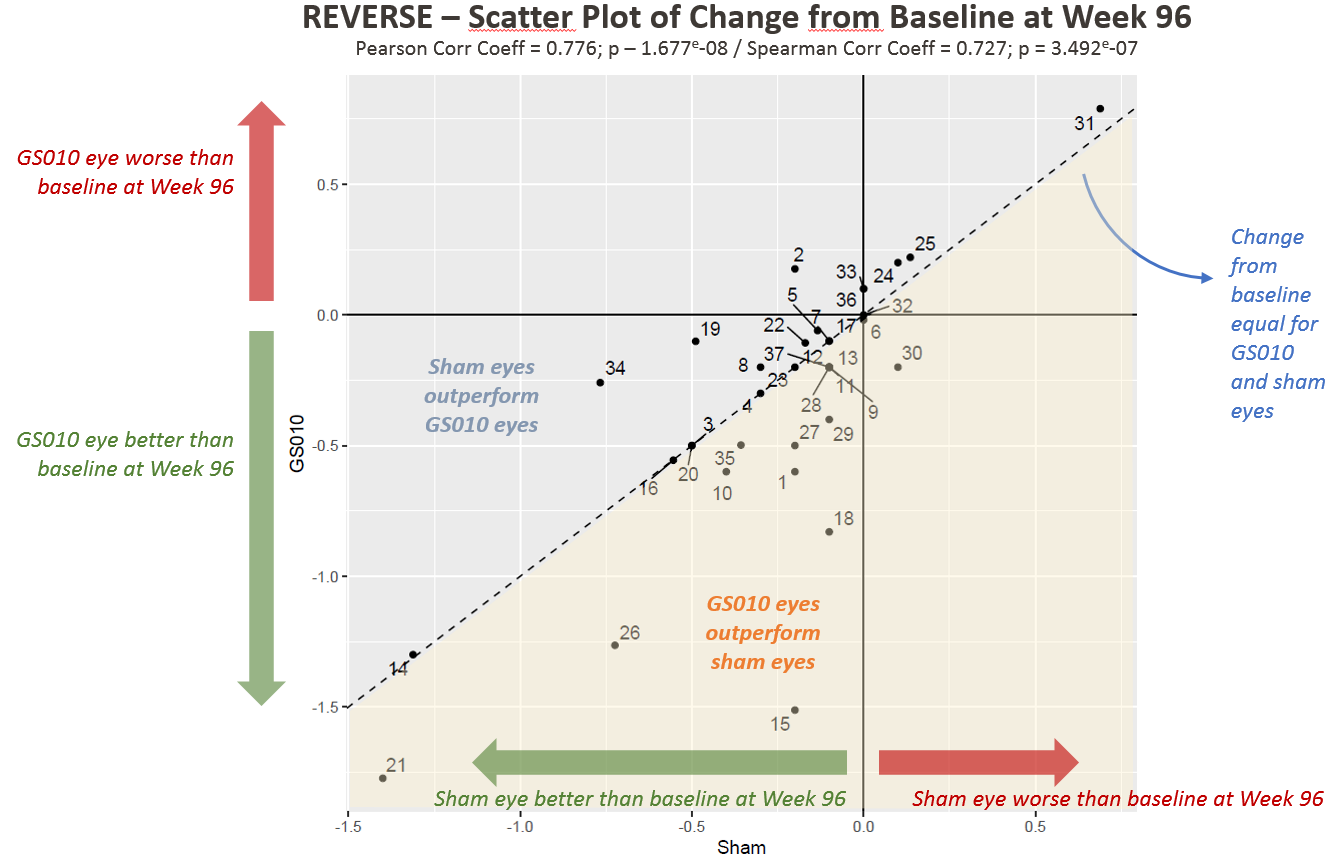 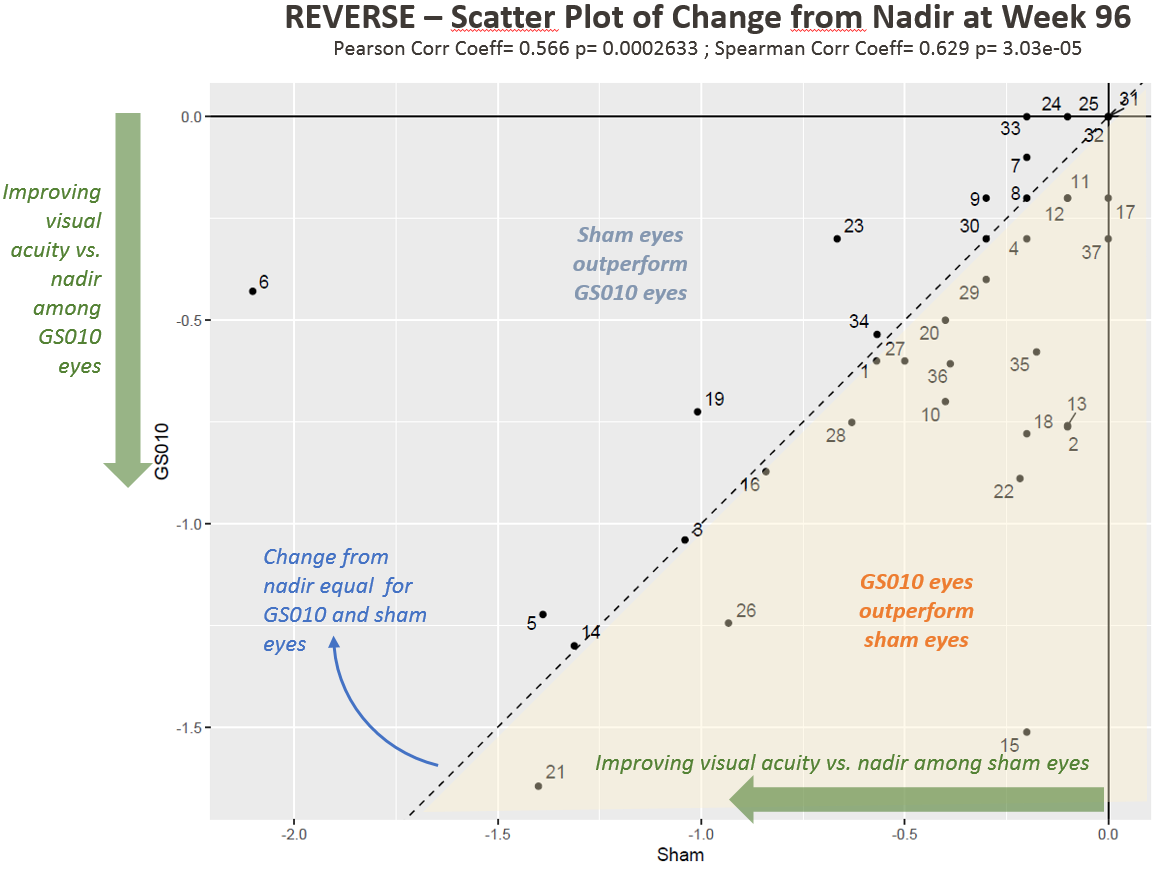 Note: Each point in Figures 1 and 2 represents one patient (two eyes) in REVERSE.

Bilateral improvement was thus a feature of individual data, not just a result of aggregation. An explanation for this durable bilateral improvement, which is at odds with natural history or known clinical practice, was the focus of Dr. Calkins’ talk. He began with the provocative observation that he would have been surprised had there been no effect in the contralateral eye. As he explained, an eye has many ways to interact with and compensate for a weakness in its fellow eye. “The fellow eye ought to improve,” he said.

Dr. Calkins’ team studies how stress in one eye can lead the other (unstressed) eye to share resources via the optic nerve. Dr. Calkins suggested that a likely mechanism for compensation between the eyes lies in the networks formed between astrocyte glia and optic nerve fibers in the retina and optic nerve, which allow sharing of metabolic molecules . “Resources can travel via astrocyte networks from the treated eye to the untreated to improve overall performance,” Dr. Calkins concluded. Recall that GS010 works by restoring the ability of mitochondria in retinal ganglion cells to generate energy needed for visual processing.

Dr. Donahue concluded by sharing the experience of a teen-aged patient who was treated with GS010 in a compassionate use program. “He went from needing to be led by his parents around a room to once again being able to play basketball,” he said. “It’s the experience of just one patient, but you can see, it’s very impressive, and the family is very thankful.”

Following the discussion, Bernard Gilly, co-founder and CEO of GenSight, underscored GenSight’s determination to bring GS010 to market as early as possible. “The team is working to prepare the pre-submission meeting with the EMA and the End of Phase 2 meeting with the FDA in order to move GS010 through the regulatory process for approval,” he said.

The presentation is available in replay on the Company’s website at https://www.gensight-biologics.com/2019/05/22/kol-event-to-present-phase-3-reverserescue-results-of-gs010-for-the-treatment-of-leber-hereditary-optic-neuropathy-lhon-new-york-city/.