Paris, France, Monday, September 23, 2019, 7.30 am CEST – GenSight Biologics (Euronext: SIGHT, ISIN: FR0013183985, PEA-PME eligible), a biopharma company focused on discovering and developing innovative gene therapies for retinal neurodegenerative diseases and central nervous system disorders, today reported the first set of results from Week 96 of the RESCUE Phase III clinical trial. The trial evaluated the efficacy and safety of a single intravitreal injection of GS010 (rAAV2/2-ND4) in 39 subjects whose visual loss due to 11778-ND4 Leber Hereditary Optic Neuropathy (LHON) commenced up to 6 months prior to study treatment. Week 96, which marks the time when individual patient profiles can be analyzed, is the last of the scheduled readouts for the RESCUE trial and completes the data collection from GS010’s pivotal trials in Europe.

The results point to continued efficacy of GS010 two years past injection, with best-corrected visual acuity (BCVA) sustaining a clinically meaningful improvement over nadir. Having been treated early in the course of the disease, RESCUE patients’ vision initially deteriorated to a worst point, or nadir, before beginning to recover. 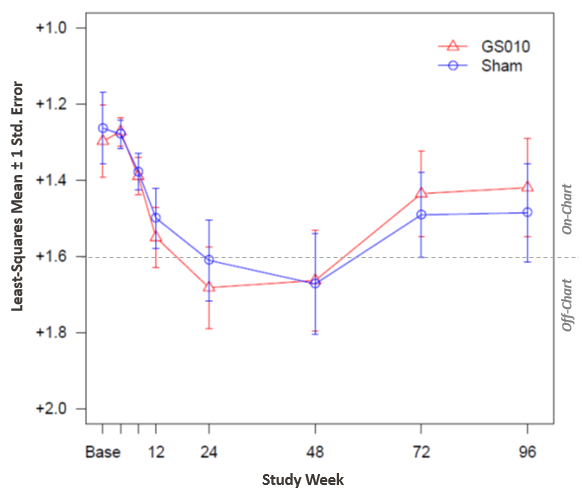 Note: A mixed model of analysis of covariance (ANCOVA) was used with change from baseline as the response, and subject, eyes of the subject as random factor, treatment and the baseline LogMAR value as covariates in the model.

Note: *”Nadir” defined as worst BCVA measured in LogMAR after baseline, up to the week of interest; baseline reading was excluded from consideration. Mean change was calculated using observed values (no data imputation).

GS010-treated eyes regained more than two-thirds of the initial loss occurring in the most acute phase of the disease. This improvement from nadir (-0.498 LogMAR mean improvement, or +24.9 ETDRS letters equivalent) corresponds to 5 lines of Snellen acuity and is far above the 3-line threshold commonly accepted as a clinically meaningful level of visual improvement. Such recovery of vision is unprecedented in any gene therapy trial. Moreover, these results demonstrate the durability of improvement seen in earlier readouts of this trial.

Vision in sham-treated eyes evolved in parallel fashion, continuing the bilateral improvement already observed in earlier Phase III readouts. The picture that has emerged is one of durable, bilateral recovery from the effects of the acute phase in LHON.

The BCVA results from RESCUE show a remarkable correspondence with those from the REVERSE trial, which studied the treatment of subjects at 6 to 12 months after onset of vision loss. 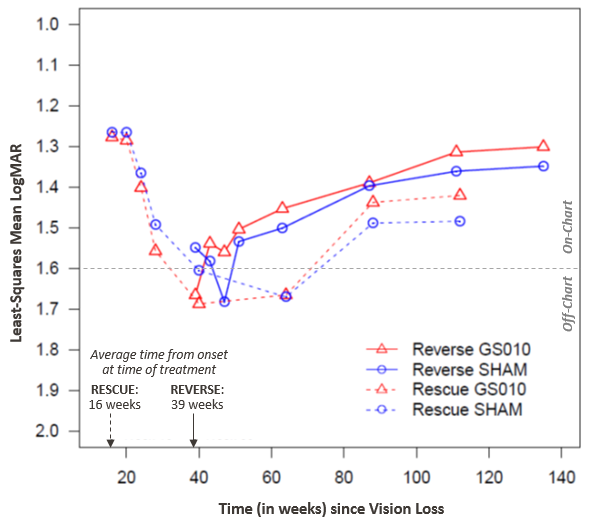 The visual evolution in RESCUE appears to be a phase shift of the REVERSE curves, with an additional impact from the acute phase. This coherence will be more rigorously explored in a meta-analysis of the pooled data from the two trials, which is planned for this year.

In previous analyses of these trials, LHON clinical experts confirmed that the visual recovery seen in these trials are at odds with and much superior to their observations from clinical practice. That natural history of vision in untreated LHON patients stands in strong contrast to acuities seen in both RESCUE and REVERSE.

A natural history study conducted by Santhera1 provides another way of assessing the results in RESCUE. In that study, 28% of subjects who had the 11778A mutation achieved the following definition of spontaneous “clinically relevant recovery” (CRR) from nadir in at least one eye:

“The results from the RESCUE study are encouraging and convincing, particularly because we are seeing a similar pattern to the REVERSE study results,” said Dr. Mark L. Moster, Neuro-Ophthalmology, Wills Eye Hospital, Professor of Neurology and Ophthalmology at Thomas Jefferson University, Philadelphia, PA, and Principal Investigator in the RESCUE and REVERSE trials. “Patients in RESCUE were treated before the nadir so, as expected, they continued to worsen early on. But then from week 48 until week 96 they experienced a recovery from the nadir. That is much better than the natural history in any prior studies.”

Examination of other visual functions and biomarkers, including Contrast Sensitivity, show that these measures stabilized at Week 96. Based on preliminary analysis of the safety data, GS010 was well-tolerated after 96 weeks. There were no ocular serious adverse events or discontinuations that were due to ocular events. The ocular adverse events most frequently reported in the therapy group were mainly related to the injection procedure, except for the occurrence of intraocular inflammation (accompanied by elevation of intraocular pressure in some patients) that is likely related to GS010, and which was responsive to conventional treatment and without sequelae. There were no systemic serious adverse events or discontinuations that were related to study treatment or study procedure.

“These results are remarkable, showing the durable difference that GS010 can make for patients who would otherwise go blind due to the onset of LHON,” commented Bernard Gilly, Co-founder and Chief Executive Officer of GenSight. “These findings, which we will be discussing at the meetings we have planned with regulatory authorities, form a compelling core for the clinical and non-clinical data that support our marketing authorization application in Europe. GenSight is excited to have reached this milestone in GS010’s clinical development and energized by the prospect of pulling it all together for our European dossier.”

GenSight is planning to schedule a pre-submission meeting with the EMA in early 2020 and expects to submit application for marketing approval in Europe in the third quarter of 2020.

An End of Phase II meeting with the U.S. Food and Drug Administration (FDA) has been requested and is expected for November 2019.

GenSight will host a conference call today, September 23, 2019, at 10:30am CEST in French, and at 2.30pm CEST (8.30am EST) in English, to discuss in greater detail these results and the roadmap to submission.

The trial planned to enroll 90 patients with vision loss up to 1 year in duration and will be conducted in multiple centers in Europe and in the US.