“Natural history studies in LHON have been difficult to conduct, so these results add to the body of knowledge and firm up the conventional wisdom that with rare exceptions, LHON is marked by precipitous loss of vision with little chance of improvement in the first few years,” commented Mark Moster, MD, Neuro-Ophthalmology, Wills Eye Hospital and Professor of Neurology and Ophthalmology at Thomas Jefferson University, Philadelphia, United-States, and investigator in the REVERSE and RESCUE trials. “The lack of improvement in the REALITY subjects is in stark contrast to the improvements seen in our  REVERSE and RESCUE patients.”

REALITY is a retrospective and cross-sectional observational study of subjects with LHON, conducted in centers across Spain, Italy, France, United Kingdom, and the United States. The objective is to generate insights about the natural history of the disease based on an approach that would facilitate comparisons with REVERSE and RESCUE. The study seeks to enroll 50 subjects by the second quarter of 2020.

Interim analysis of REALITY, based on the fifteen subjects with the ND4 mutation who were at least 15 years old at onset and who had enrolled in the study as of September 2019, shows the dramatic and usually irreversible decline in visual acuity that is the typical outcome for ND4 LHON patients. Unlike in subjects enrolled in REVERSE and RESCUE, who all received a unilateral injection of LUMEVOQ™, mean visual acuity in REALITY subjects did not recover after the initial decline.

Figure 1. LHON Natural History from Interim Analysis of REALITY vs. Time Course of Visual Acuity from REVERSE and RESCUE 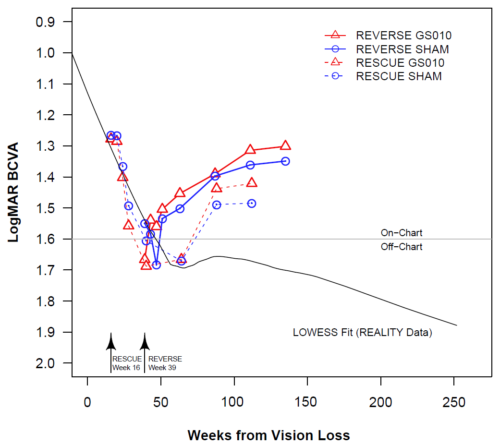 Note: BCVA = best-corrected visual acuity. The LOWESS line for REALITY (n=15 subjects) is based on a series of polynomial regressions around each data point. The regressions use a limited look back and look forward and give distant points less weight. The time course of BCVA for REVERSE and RESCUE uses the least-squares mean based on a mixed model ANCOVA analysis. The starting points of the curves are set to the average time from onset to time of treatment (16 weeks for RESCUE, 39 weeks for REVERSE).

“These findings highlight just how remarkable the visual trends in REVERSE and RESCUE are,” commented Bernard Gilly, Co-founder and Chief Executive Officer of GenSight. “The findings will support our effort to provide regulatory authorities with the most robust insights about the natural history of the disease, so that we can convincingly demonstrate the therapeutic benefit delivered by LUMEVOQ™.”

A second set of results, derived from a pooled dataset of baseline readings from the REVERSE and RESCUE patient populations, shows that eyes farther along the progression of the disease, as measured by time since onset, had worse visual acuity.

Figure 2. Best-Corrected Visual Acuity (BCVA) Prior to Injection Among REVERSE and RESCUE Patients, by Time Since Onset 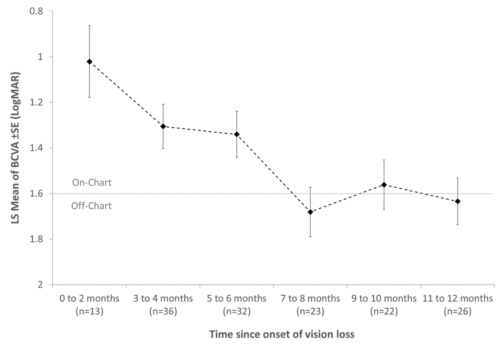 Note: Eyes of REVERSE and RESCUE patients were categorized according to the time between onset of vision loss and baseline reading (one day before injection). The n’s represent the number of eyes in each time grouping. By design, the maximum value for onset in the pooled data is 12 months. The average for each group represents the least-squares mean of BCVA values in LogMAR. The y-axis shows an inverted LogMAR scale to represent worse vision with lower vertical positions.

The picture of visual decline is based on cross-sectional data, yet remains consistent with the pattern revealed by the interim analysis for REALITY.

LUMEVOQ™ (GS010) targets Leber Hereditary Optic Neuropathy (LHON) by leveraging a mitochondrial targeting sequence (MTS) proprietary technology platform, arising from research conducted at the Institut de la Vision in Paris, which, when associated with the gene of interest, allows the platform to specifically address defects inside the mitochondria using an AAV vector (Adeno-Associated Virus). The gene of interest is transferred into the cell to be expressed and produces the functional protein, which will then be shuttled to the mitochondria through specific nucleotidic sequences in order to restore the missing or deficient mitochondrial function. “LUMEVOQ” was accepted as the invented name for GS010 (lenadogene nolparvovec) by the European Medicines Agency (EMA) in October 2018.

The trial planned to enroll 90 patients with vision loss up to 1 year in duration and will be conducted in multiple centers in Europe and in the US.

The study will recruit at least 50 subjects (both adult and pediatric) chiefly in the following countries: Spain, Italy, France, United Kingdom, and the United States.

The primary objectives for the REALITY study are: to describe the evolution of visual functional and structural changes and other associated symptoms in patients with LHON; understand the impact of LHON-related vision loss on the HRQoL; and understand the economic burden for patients and their families arising from direct and indirect costs associated with the disease. The secondary objective is to describe the relationship between genetic, lifestyle and/or environmental factors and the expression of the LHON phenotype.

The first subject was enrolled on 3 January 2018, and enrollment is targeted to be completed in early Q2 2020.