“The REALITY findings bolster the case that the improvements we saw in REVERSE, RESCUE and the first analysis of CLIN06 could not have arisen simply from spontaneous recovery among LHON patients,” commented Bernard Gilly, Co-founder and Chief Executive Officer of GenSight. “We intend to bring this and other scientific evidence to the authorities to make a robust and convincing argument about the outstanding therapeutic benefit delivered by LUMEVOQ®.”

LUMEVOQ® (GS010), the gene therapy developed by GenSight Biologics for the treatment of vision loss in patients with LHON caused by a mutated ND4 mitochondrial gene, is on track to be submitted for European marketing authorization in September 2020.

Statistical analysis of the visual acuity in 23 REALITY subjects aged 15 or older with a mutated ND4 gene shows that on average, vision failed to recover from an initial sudden decline, even several years after vision loss. The sharp deterioration followed by an extended period of low visual acuity stands in sharp contrast with the improvements observed in the LUMEVOQ® RESCUE and REVERSE trials. 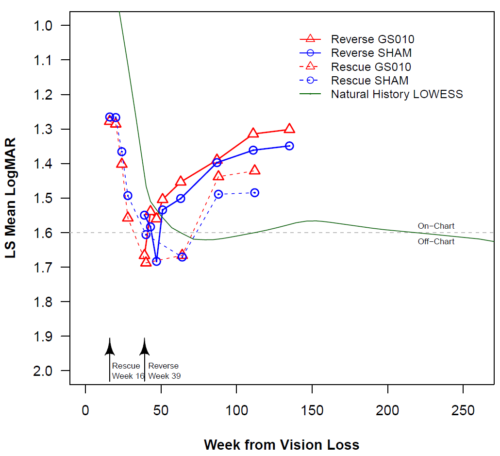 Note: BCVA = best-corrected visual acuity. The LOWESS line for REALITY (n=23 subjects aged 15 or older at time of vision loss) is based on a series of polynomial regressions around each data point. The regressions use a limited look back and look forward and give distant points less weight. The time course of BCVA for REVERSE and RESCUE uses the least-squares mean based on a mixed model ANCOVA analysis. The starting points of the curves are set to the average time from onset to time of treatment (16 weeks for RESCUE, 39 weeks for REVERSE).

“The REALITY results are entirely in keeping with a recent meta-analysis currently in press in the Journal of Neuro-Ophthalmology*, which showed that only about 11% of ND4 LHON patients have some degree of meaningful spontaneous improvement in vision,” noted Dr. Nancy Newman, LeoDelle Jolley Professor of Ophthalmology and Neurology at the Emory University School of Medicine in Atlanta, GA, USA, and one of the leading authorities on LHON.

REALITY was a retrospective and cross-sectional observational study of subjects with LHON, conducted in centers across Spain, Italy, France, United Kingdom, and the United States. The objective was to generate insights about the natural history of the disease based on an approach that would facilitate comparisons with REVERSE and RESCUE. The study aimed to enroll 50 subjects, but enrollment was curtailed due to measures taken to protect patients in the COVID-19 pandemic.

Of the 44 subjects who were enrolled before the COVID-19 measures took effect, 23 were 15 years old or older at the time of vision loss due to their mutated ND4 gene. Of these 23 ND4 subjects, 15 had been treated with idebenone, the majority within 12 months of their vision loss.

The RESCUE and REVERSE pivotal trials evaluated the efficacy and safety of a single intravitreal injection of LUMEVOQ® in LHON subjects who were at 0-6 months and 6-12 months, respectively, from onset of vision loss due to carrying a mutated ND4 mitochondrial gene. 61 of the RESCUE and REVERSE subjects accepted the invitation for long-term follow-up in the CLIN06 trial, which recently reported initial results.

LUMEVOQ® (GS010) targets Leber Hereditary Optic Neuropathy (LHON) by leveraging a mitochondrial targeting sequence (MTS) proprietary technology platform, arising from research conducted at the Institut de la Vision in Paris, which, when associated with the gene of interest, allows the platform to specifically address defects inside the mitochondria using an AAV vector (Adeno-Associated Virus). The gene of interest is transferred into the cell to be expressed and produces the functional protein, which will then be shuttled to the mitochondria through specific nucleotidic sequences in order to restore the missing or deficient mitochondrial function. “LUMEVOQ” was accepted as the invented name for GS010 (lenadogene nolparvovec) by the European Medicines Agency (EMA) in October 2018.

The study will recruit at least 50 subjects (both adult and pediatric) chiefly in the following countries: Spain, Italy, France, United Kingdom, and the United States.

The primary objectives for the REALITY study are: to describe the evolution of visual functional and structural changes and other associated symptoms in patients with LHON; understand the impact of LHON-related vision loss on the HRQoL; and understand the economic burden for patients and their families arising from direct and indirect costs associated with the disease. The secondary objective is to describe the relationship between genetic, lifestyle and/or environmental factors and the expression of the LHON phenotype.