Treated eyes showed progressive and sustained improvement from Month 12 to Month 52, in contrast to the absence of recovery over the same period for untreated eyes. At Month 18, the difference became statistically significant (p=0.01). By Month 48, the difference between the mean visual acuity in treated patients and that in untreated patients was both statistically significant (p<0.01) and clinically meaningful (-0.33 LogMAR, or +16.5 ETDRS letters equivalent, in favor of treated eyes). 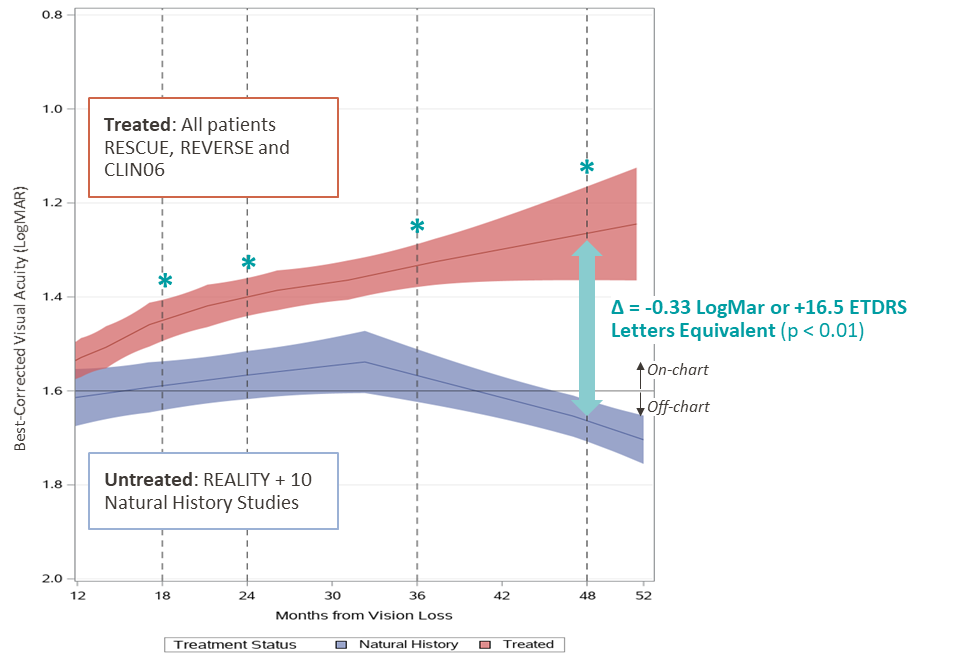 Note: All patients had a confirmed G11778A mutation in the ND4 mitochondrial gene and were at least 15 years old. The diagram shows the Locally Estimated Scatterplot Smoothing (LOESS) curves for visual acuity in LUMEVOQ®-treated patients and untreated patients. The shaded areas represent the 95% confidence interval for the mean BCVA. “Treated” eyes refer to all eyes (LUMEVOQ® and sham) from the RESCUE, REVERSE and CLIN06 trials (N=76 patients / 152 eyes). Untreated eyes refer to patient-level data from the REALITY study and a matched data set from two prospective and eight retrospective natural history studies1 (N=208 patients / 408 eyes). LOESS curves were estimated using a non-parametric, local regression model that treated each eye as independent of the other. LOESS curves are shown from Month 12 to depict post-treatment progression among treated patients (93% of LUMEVOQ® patients had already been treated within 12 months from onset). *Statistically significant difference between mean visual acuity of treated and untreated eyes at M18, M24, M36 and M48, as illustrated by the non-overlapping confidence intervals.

The analysis compared data from the completed Phase III trials RESCUE and REVERSE studies and interim results from the long-term follow-up CLIN06 study to a matched sample created from the REALITY registry study and 10 other natural history studies1. The natural history studies were identified from an extensive review of the scientific literature and selected based on specific inclusion criteria for their patient-level data. In all, the visual outcomes in 76 treated patients could be compared to the visual outcomes of 208 untreated patients.

“The extra granularity of this analysis down to individual patient data confirms that the natural history of visual outcomes in ND4-LHON patients is poor and provides the best comparison we have for assessing the therapeutic efficacy of gene therapy,” commented Dr. Nancy J. Newman, MD, LeoDelle Jolley Professor of Ophthalmology and Neurology at the Emory University School of Medicine in Atlanta, GA, USA, and a global authority on LHON who recently completed a meta-analysis of the natural history of ND4-LHON.2

Separate analyses of patients enrolled in RESCUE and REVERSE demonstrated similarly favorable results compared to untreated patients. Full findings from the indirect comparison were included in the European Marketing Authorisation Application (MAA) for LUMEVOQ® and are being prepared for publication in a peer-reviewed journal.

“This indirect comparison represents a significant contribution to our understanding of LUMEVOQ®’s therapeutic effect,” said Dr. José-Alain Sahel, MD, Director of the Institut de la Vision (Sorbonne-Université/Inserm/CNRS), Paris, France; Chairman of the Department of Ophthalmology at Centre Hospitalier National d’Ophtalmologie des XV-XX, Paris, France; Professor and Chairman of the Department of Ophthalmology at University of Pittsburgh School of Medicine and UPMC (University of Pittsburgh Medical Center), USA; and Co-Founder of GenSight Biologics. “The use of a large external control group, including analyses of patient-level data, provides more evidence for a significant treatment-related visual improvement.”

“The findings are a gratifying outcome of our push to overcome a key challenge for assessing LUMEVOQ®’s efficacy, namely the inability of sham eyes to act as a control group,” commented Bernard Gilly, Co-founder and Chief Executive Officer of GenSight. “We are excited to take this evidence – that LUMEVOQ® modifies the disease outcome – forward into our conversations with national and regional authorities.”

The LUMEVOQ® MAA was filed in September, and the decision is expected in H2 2021. The Company is also working towards submitting LUMEVOQ®’s Biologics License Application (BLA) to the FDA in H2 2021.

Rationale for the Indirect Comparison

In both the REVERSE and RESCUE studies, as well as in the long-term follow-up study CLIN06, unilaterally injected patients experienced an unexpected visual improvement in their contralateral eye, which mirrored the sustained and clinically relevant gain in eyes treated with LUMEVOQ®. This bilateral improvement eliminated the control group that was to consist of sham eyes in the original trial design. An indirect comparison methodology, based on formal statistical methods applied to an external control group, was needed to assess the magnitude of LUMEVOQ® efficacy.

The sample of LUMEVOQ®-treated patients included all data from the two pivotal studies REVERSE and RESCUE and Year 3 data from the ongoing extension study CLIN06. This approach yielded a treated patient pool consisting of 76 patients (152 eyes), with LUMEVOQ®-injected eyes and sham-treated eyes considered equivalent, based on the contralateral effect demonstrated in the studies.

The external control group included data from the REALITY Natural History registry and patient-level data from 10 published articles1 on ND4-LHON, which were identified from a systematic review of the literature. ND4-LHON studies were included in the indirect comparison only if they had individual patient data that would allow indirect comparison with LUMEVOQ®-treated patients: confirmed ND4 genotype, at least 15 years of age, at least one BCVA measurement with associated time of vision loss. The final external control group included 208 patients (408 eyes).

The visual acuity curves of treated and untreated patients were defined using a Locally Estimated Scatterplot Smoothing (LOESS), non-parametric, local regression model. They were aligned in terms of time from vision loss for the statistical tests performed at M12, M18, M24, M36 and M48 from vision loss and at the last available observation. The starting time point for the statistical tests (12 months post-vision loss) was defined to enable assessment of LUMEVOQ® efficacy, as 93% of LUMEVOQ® patients were treated by that time.

LUMEVOQ® (GS010) targets Leber Hereditary Optic Neuropathy (LHON) by leveraging a mitochondrial targeting sequence (MTS) proprietary technology platform, arising from research conducted at the Institut de la Vision in Paris, which, when associated with the gene of interest, allows the platform to specifically address defects inside the mitochondria using an AAV vector (Adeno-Associated Virus). The gene of interest is transferred into the cell to be expressed and produces the functional protein, which will then be shuttled to the mitochondria through specific nucleotidic sequences in order to restore the missing or deficient mitochondrial function. “LUMEVOQ” was accepted as the invented name for GS010 (lenadogene nolparvovec) by the European Medicines Agency (EMA) in October 2018.

The primary endpoint measures the difference in efficacy of GS010 in treated eyes compared to sham-treated eyes based on Best‑Corrected Visual Acuity (BCVA), as measured with the ETDRS at 48 weeks post-injection. The patients’ LogMAR (Logarithm of the Minimal Angle of Resolution) scores, which are derived from the number of letters patients read on the ETDRS chart, will be used for statistical purposes. Both trials have been adequately powered to evaluate a clinically relevant difference of at least 15 ETDRS letters between treated and untreated eyes adjusted to baseline.

The secondary endpoints involve the application of the primary analysis to best‑seeing eyes that received GS010 compared to those receiving sham, and to worse‑seeing eyes that received GS010 compared to those that received sham. Additionally, a categorical evaluation with a responder analysis was evaluated, including the proportion of patients who maintain vision (< ETDRS 15L loss), the proportion of patients who gain 15 ETDRS letters from baseline and the proportion of patients with Snellen acuity of >20/200. Complementary vision metrics include automated visual fields, optical coherence tomography, and color and contrast sensitivity, in addition to quality of life scales, bio‑dissemination and the time course of immune response. Readouts for these endpoints are at 48, 72 and 96 weeks after injection.

The trials were conducted in parallel, in 37 subjects for REVERSE and 39 subjects for RESCUE, in 7 centers across the United States, the UK, France, Germany and Italy. Week 96 results were reported in 2019 for both trials, after which patients were transferred to a long-term follow-up study that will last for three years.

The study aimed to recruit at least 50 subjects (both adult and pediatric) chiefly in the following countries: Spain, Italy, France, United Kingdom and the United States.

The primary objectives for the REALITY study were: to describe the evolution of visual functional and structural changes and other associated symptoms in patients with LHON; understand the impact of LHON-related vision loss on the HRQoL; and understand the economic burden for patients and their families arising from direct and indirect costs associated with the disease. The secondary objective is to describe the relationship between genetic, lifestyle and/or environmental factors and the expression of the LHON phenotype.

The first subject was enrolled on 3 January 2018. Enrollment was completed in early Q2 2020.