Paris, France, May 3, 2021, 7:30 am CEST – GenSight Biologics (Euronext: SIGHT, ISIN: FR0013183985, PEA-PME eligible), a biopharma company focused on developing and commercializing innovative gene therapies for retinal neurodegenerative diseases and central nervous system disorders, today announced that Eye, the official journal of the Royal College of Ophthalmologists (UK), has published the final results of the REALITY Leber Hereditary Optic Neuropathy (LHON) Registry study. The paper*, published in the April 28 issue of Eye under the title “Natural History of Patients with Leber Hereditary Optic Neuropathy – Results from the REALITY study”, was a retrospective study of 44 LHON patients whose data were collected from a period spanning the pre-symptomatic stage of the disease to at least more than one year after onset of vision loss (chronic stage).

The investigators analyzed the natural history visual outcomes of patients with Leber Hereditary Optic Neuropathy (LHON) who carried one of the three primary mitochondrial DNA (mtDNA) mutations that cause approximately 90% of all cases. One of the main findings is that the worst outcomes were reported in patients with LHON caused by the m.11778G>A mutation in the ND4 gene, who were aged at least 15 years old at onset. Statistical modeling of the evolution of best-corrected visual acuity (BCVA) over time found no tendency for spontaneous recovery, instead depicting a severe and permanent deterioration of BCVA.

“The REALITY study confirms the devastating effect of the m.11778G>A mutation on vision and the poor visual prognosis, more so for patients who are 15 years or older at the time of disease onset,” commented lead author Dr. Patrick Yu-Wai-Man, MD, PhD, REALITY principal investigator and Associate Professor and Honorary Consultant Ophthalmologist at the University of Cambridge, Moorfields Eye Hospital, and the UCL Institute of Ophthalmology, London, United Kingdom.

REALITY was an international observational retrospective registry of LHON patients naïve to gene therapy conducted in 11 centers in France, Italy, Spain, the UK and the US. Of the 44 patients who were enrolled, a subset of 23 carried the m.11778G>A mutation in the ND4 gene and were at least 15 years old at onset of vision loss. Age and gender distribution in this subset of patients matched those of the subjects treated with LUMEVOQ® in the RESCUE and REVERSE clinical trials.

At the last observation available (on average 3 years after onset of symptoms), these patients had a mean BCVA of 1.55 LogMAR, equivalent to a Snellen fraction of 20/700. Locally Weighed Scatterplot Smoothing (LOWESS) regression analysis was used to model the evolution of BCVA in the ND4 LHON patients aged at least 15 years old. The fitted curve showed an initial marked loss of vision during the acute phase of the disease, followed by a continuous deterioration of BCVA over the 3-year follow-up, with no trend for spontaneous visual recovery. Notably, half of the eyes in these patients had off-chart visual acuity at the last available observation.

Figure 1. Evolution of BCVA in ND4-LHON patients aged ≥ 15 at onset of vision loss 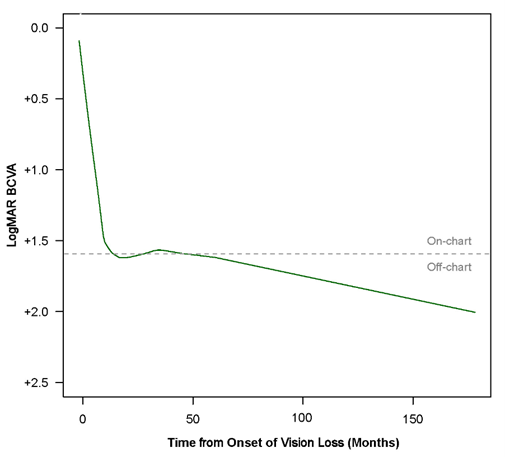 The curve depicts the Locally Weighed Scatterplot Smoothing (LOWESS) regression analysis of 213 individual BCVA data points collected in 23 LHON patients with the ND4 mutation who were ≥ 15 at onset.

These findings for LHON patients with the m.11778G>A mutation are consistent with a recent meta-analysis of the literature, which reported a severe visual loss with rare or poor spontaneous recovery in this population.a

The pattern of a sharp deterioration of visual acuity followed by an extended period of low acuity stands in stark contrast against the improvements observed in the RESCUE and REVERSE trials.

18Department of Ophthalmology, University of Ottawa Eye, Ottawa ON Canada

22Department of Ophthalmology, The University of Pittsburgh School of Medicine, Pittsburgh, PA, USA

REALITY is a multi-country retrospective and cross-sectional observational study of affected LHON subjects, based on subjects’ medical charts and the administration of surveys on Health-Related Quality of Life (HRQoL) and direct and indirect costs associated with the disease. The study enrolled 44 subjects (both adult and pediatric) chiefly in the following countries: Spain, Italy, France, United Kingdom, and the United States.

The primary objective for the REALITY study was to describe the evolution of visual functional and structural changes and other associated symptoms in patients with LHON; understand the impact of LHON-related vision loss on the HRQoL; and understand the economic burden for patients and their families arising from direct and indirect costs associated with the disease. The secondary objective is to describe the relationship between genetic, lifestyle and/or environmental factors and the expression of the LHON phenotype.