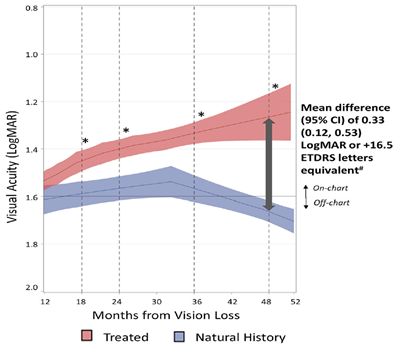 Note: All patients had a confirmed G11778A mutation in the ND4 mitochondrial gene and were at least 15 years old at onset. The diagram shows the Locally Estimated Scatterplot Smoothing (LOESS) curves for visual acuity in LUMEVOQ®-treated patients and untreated patients, with the shaded areas representing the 95% confidence interval for the mean BCVA. “Treated” eyes refer to all eyes (LUMEVOQ® and sham) from the RESCUE, REVERSE and CLIN06 trials (N=152 eyes from 76 patients). Untreated eyes refer to patient-level data from a matched data set from the REALITY study, two prospective and eight retrospective natural history studiesd (N=408 eyes from 208 patients). *A statistically significant difference between treated and natural history eyes is illustrated by the non-overlapping confidence intervals of the LOESS curves.

“Detailed analysis of what the literature can tell us about the natural history of this devastating blinding disorder does confirm its poor visual prognosis,” said Dr. Nancy J. Newman, MD, lead and corresponding author, RESCUE principal investigator and LeoDelle Jolley Professor of Ophthalmology and Neurology at the Emory University School of Medicine in Atlanta, GA, USA.

The publication represents a peer-review validation of the analyses submitted in LUMEVOQ®’s Marketing Authorisation Application in Europe, which was filed in September 2020. Review of the dossier is ongoing, with the EMA decision expected in H1 2022.

Overview of the indirect comparison methodology

The indirect comparison approach was pursued because an unexpected and significant contralateral effect in the RESCUEa and REVERSEb Phase III trials effectively eliminated the sham-injected eyes as a control group for the drug-injected eyes. For a better characterization of LUMEVOQ® efficacy, a natural history, or untreated, pool had to be assembled from patients carrying the same mutation as those in the clinical trials.

The authors formed the “efficacy pool” by combining all visual acuity observations from inclusion to Week 96 in the 76 RESCUE and REVERSE patients, with those of patients who accepted to participate in the long-term follow-up study RESTORE (CLIN06). Because of the contralateral effect, visual acuity measurements for sham-treated eyes were included in the efficacy dataset.

The natural history pool was formed from patients who were not treated with LUMEVOQ®; they could, however, have been treated with idebenone. The dataset was created using visual outcome data from the REALITY LHON registryc and 10 published studies on LHON that were identified after a systematic review of the literatured. Only studies with patient- and eye-level visual acuity values, along with documentation of the time after vision loss in cohorts with at least five MT-ND4 patients, were included (208 patients).

Month 12 after vision loss was selected as the starting point of the indirect comparison, as nearly all (93%) of the eyes in the efficacy pool had been treated at that point. The evolution of the visual acuity was estimated using a locally estimated scatterplot smoothing (LOESS), non-parametric, local regression model.

Key findings from the indirect comparison

Treated eyes had better visual acuity compared to natural history eyes at 12, 18, 24, 36 and 48 months after vision loss. The difference in mean visual acuity was statistically significant at all time points, with the clinically meaningful difference at 48 months amounting to +16.5 ETDRS letters equivalent (more than +3 lines on the ETDRS vision chart) in favor of treated eyes. The treatment effect was confirmed even after confounding covariates, such as age at onset of vision loss, gender and duration of follow-up, were taken into account using multivariate analysis.

The treatment effect was similarly reflected in eye responder rates, which was approximately double when patients were treated, regardless of the responder measure selected (e.g., percentage of eyes with on-chart visual acuity at Month 48 and at last observation; percentage of eyes above the WHO criteria for blindness at Month 48 and at last observation).

16  Department of Ophthalmology, University of Ottawa Eye, Ottawa, ON, Canada

REALITY is a multi-country retrospective and cross-sectional observational study of affected LHON subjects, based on subjects’ medical charts and the administration of surveys on Health-Related Quality of Life (HRQoL) and direct and indirect costs associated with the disease. The study enrolled 44 subjects (both adult and pediatric) chiefly in the following countries: Spain, Italy, France, United Kingdom, and the United States.

The primary objective for the REALITY study was to describe the evolution of visual functional and structural changes and other associated symptoms in patients with LHON; understand the impact of LHON-related vision loss on the HRQoL; and understand the economic burden for patients and their families arising from direct and indirect costs associated with the disease. The secondary objective is to describe the relationship between genetic, lifestyle and/or environmental factors and the expression of the LHON phenotype.