Dr. Sergott added, “The bilateral injection of LUMEVOQ, showing better efficacy with no tradeoff in terms of safety or tolerability, makes the gene therapy a compelling therapeutic option. LUMEVOQ has changed the lives of patients with Leber Hereditary Optic Neuropathy.”

Designed under a Special Protocol Assessment with the FDA, the REFLECT trial is a randomized, double-masked, placebo-controlled Phase III trial involving 98 subjects with vision loss due to Leber Hereditary Optic Neuropathy (LHON) caused by a mutated ND4 mitochondrial gene; enrolled ND4 subjects had vision loss up to one year from onset. The ND4 mitochondrial mutation is associated with the most severe clinical form of LHON, with poor overall visual outcomes.1 All subjects received an intravitreal injection (IVT) of LUMEVOQ® in their first affected eye. The second affected eye was randomized to either a second IVT of LUMEVOQ® or a placebo IVT, which was administered on the same day or the following day. 48 subjects were randomized to LUMEVOQ® bilateral treatment, and 50 to LUMEVOQ® unilateral treatment (first-affected eye treated with LUMEVOQ®, second-affected eye treated with placebo). 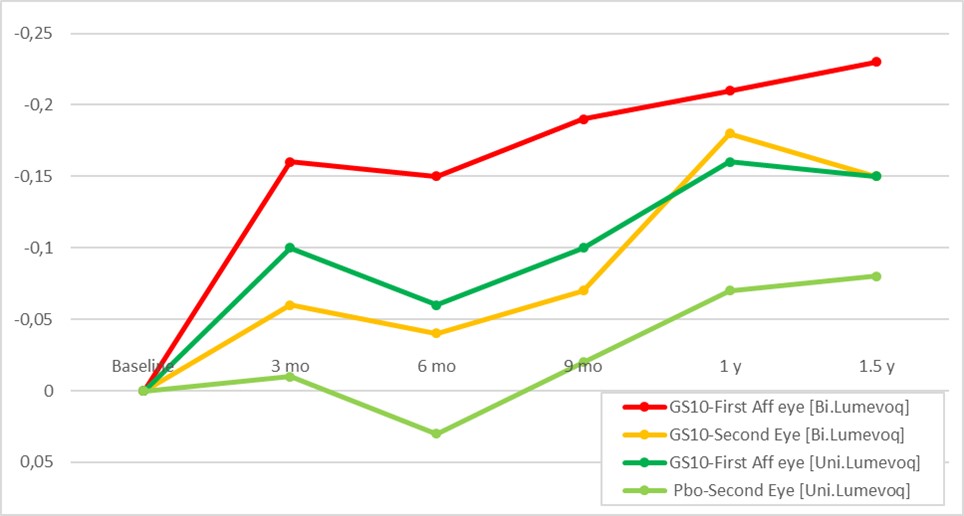 Note:  Difference from baseline LogMAR. LS means are estimated by mixed models at the eye level, adjusted on baseline, with repeated values for each patient.

Note: Mean LogMAR at each timepoint

Comparison against nadir (worst BCVA from baseline to 1.5 year) more starkly demonstrates the efficacy of LUMEVOQ®, even for the placebo eyes that showed the contralateral effect.

At 1.5 years, improvement by at least 3 lines from nadir was demonstrated by 69% and 64% of bilaterally and unilaterally treated subjects, respectively.

LUMEVOQ® efficacy from the three Phase III trials – RESCUE, REVERSE and REFLECT – is highly consistent across the studies.

GenSight Biologics plans to add the full results of REFLECT to the EMA clinical dossier during the ongoing review of the LUMEVOQ® Marketing Authorisation Application and will present the analyses to the FDA later this year.

GenSight will host a KOL event on Friday, July 9, at 8:00 am EDT / 2:00 pm CEST, to present key results of REFLECT. Details will be announced at a later date.

Leber Hereditary Optic Neuropathy (LHON) is a rare maternally inherited mitochondrial genetic disease, characterized by the degeneration of retinal ganglion cells that results in brutal and irreversible vision loss that can lead to legal blindness, and mainly affects adolescents and young adults. LHON is associated with painless, sudden loss of central vision in the 1st eye, with the 2nd eye sequentially impaired. It is a symmetric disease with poor functional visual recovery. 97% of subjects have bilateral involvement at less than one year of onset of vision loss, and in 25% of cases, vision loss occurs in both eyes simultaneously. The estimated incidence of LHON is approximately 800-1,200 new subjects who lose their sight every year in the United States and the European Union.

The trial was conducted in multiple centers across Europe (1 each in France, Spain, Italy and the UK), the US (6 centers) and Taiwan (1 center). The trial planned to enroll 90 subjects with vision loss up to 1 year in duration; 98 subjects were successfully screened and treated. The first subject was treated in March 2018 and the last one in July 2019.