The paper*, published in the September issue of JNO under the title “Long-Term Follow-Up After Unilateral Intravitreal Gene Therapy for Leber Hereditary Optic Neuropathy: The RESTORE Study”, presents analyses that show sustained improvement in best-corrected visual acuity (BCVA) and quality of life scores three years after subjects received LUMEVOQ® treatment. The continuous improvement in BCVA was demonstrated in both eyes of the unilaterally treated patients, confirming the contralateral treatment effect reported in the RESCUE and REVERSE trials.

“It is gratifying to see this sustained outcome”, commented lead author Dr. Valérie Biousse, MD, Departments of Ophthalmology and Neurology, Emory University School of Medicine, Atlanta, GA. Dr. Biousse, who was also an co‑investigator in the RESCUE and REVERSE trials, added, “This is further evidence of a bilateral therapeutic effect of a single unilateral gene therapy injection.” 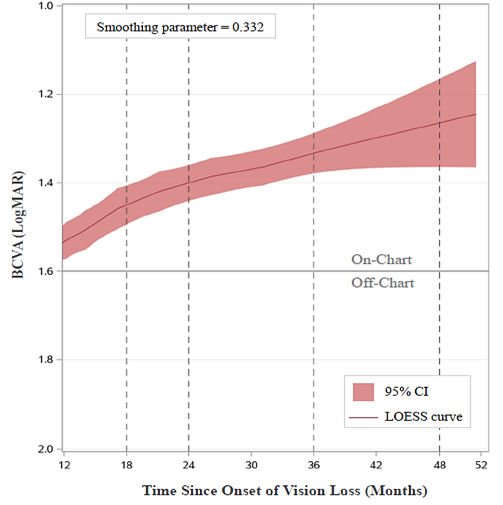 BCVA: best-corrected visual acuity, CI: confidence interval; LOESS: locally estimated scatterplot smoothing, LogMAR: logarithm of the minimal angle resolution. The LOESS curve shows the evolution of BCVA in all eyes (LUMEVOQ®– and sham-treated) from 12 months to 51.5 months (last available data point) after onset of vision loss. The curve starts at 12 months after onset when 92.7% of eyes in RESCUE and REVERSE had received treatment, either with LUMEVOQ® or a sham injection.

In addition, subjects’ quality of life continued to improve between Year 2 and Year 3 post-injection, as documented by scores reported in the visual function questionnaire VFQ-25. Relative to baseline, the mean VFQ-25 composite score (averaging 11 vision‑related subscales) was higher by 4 points at Year 2 and 7 points at Year 3. At Year 3, clinically meaningful improvement from baseline were seen in the sub-scores that corresponded to mental health (+21 points), role difficulties (+17 points), dependency (+15 points), general vision (+9 points), near activities (+6 points), and distance activities (+5 points).

RESCUE and REVERSE were randomized, double-masked, sham-controlled, Phase III clinical trials that assessed the efficacy and safety of LUMEVOQ® gene therapy as a treatment for vision loss due to ND4-LHON. The only difference between the two studies was the duration of vision loss at screening: RESCUE subjects had vision loss for less than 6 months, while REVERSE subjects had vision loss for 6 to 12 months. The 72 subjects who completed the Phase III trials RESCUE and REVERSE were invited to participate in RESTORE, and 62 (86.1%) agreed to be monitored up to five years after treatment.

The paper is available at:          https://journals.lww.com/jneuro-ophthalmology/Fulltext/2021/09000/Long_Term_Follow_Up_After_Unilateral_Intravitreal.5.aspx.

About RESCUE, REVERSE, and RESTORE

RESCUE and REVERSE were two separate randomized, double-masked, sham-controlled Phase III trials designed to evaluate the efficacy of a single intravitreal injection of GS010 (rAAV2/2-ND4) in subjects affected by LHON due to the G11778A mutation in the mitochondrial ND4 gene.

The primary endpoint measured the difference in efficacy of GS010 in treated eyes compared to sham-treated eyes based on Best‑Corrected Visual Acuity (BCVA), as measured with the ETDRS at 48 weeks post-injection. The patients’ LogMAR (Logarithm of the Minimal Angle of Resolution) scores, which are derived from the number of letters patients read on the ETDRS chart, were used for statistical purposes. Both trials were adequately powered to evaluate a clinically relevant difference of at least 15 ETDRS letters between drug-treated and sham-treated eyes, adjusted to baseline.

The secondary endpoints involved the application of the primary analysis to best‑seeing eyes that received GS010 compared to those receiving sham, and to worse‑seeing eyes that received GS010 compared to those that received sham. Additionally, a categorical evaluation with a responder analysis was performed, including the proportion of patients who maintained vision (< ETDRS 15L loss), the proportion of patients who gained 15 ETDRS letters from baseline and the proportion of patients with Snellen acuity of >20/200. Complementary vision metrics included automated visual fields, optical coherence tomography, and color and contrast sensitivity, in addition to quality-of-life scales, bio‑dissemination and the time course of immune response. Readouts for these endpoints were at 48, 72 and 96 weeks after injection.

The trials were conducted in parallel, in 37 subjects for REVERSE and 39 subjects for RESCUE, in 7 centers across the United States, the UK, France, Germany and Italy. Week 96 results were reported in 2019 for both trials, after which patients were invited to participate in a long-term follow-up study, RESTORE, for three additional years.