Paris, France, September 9, 2021, 7:30 am CET – GenSight Biologics (Euronext: SIGHT, ISIN: FR0013183985, PEA-PME eligible), a biopharma company focused on developing and commercializing innovative gene therapies for retinal neurodegenerative diseases and central nervous system disorders, today announced that the Journal of Neuro-Ophthalmology has published a paper on a cross-sectional analysis of the baseline (pre-treatment) characteristics of the ND4-LHON subjects enrolled in the RESCUE and REVERSE Phase III trials of LUMEVOQ®.

The paper*, published in the September issue under the title “Cross‑Sectional Analysis of Baseline Visual Parameters in Subjects Recruited into the RESCUE and REVERSE ND4-LHON Gene Therapy Studies”, confirms drastic loss of visual function and anatomy in the year after onset of vision loss due to Leber hereditary optic neuropathy (LHON) caused by the G11778A mutation in the ND4 gene.

“This cross-sectional analysis of patients with strict examination protocols demonstrates that once symptomatic with ND4-LHON, visual acuity and retinal structures rapidly deteriorate over months to a level of legal blindness,” commented lead author Dr. Mark L. Moster, MD, Department of Neuro-Ophthalmology, Wills Eye Hospital and Professor of Neurology and Ophthalmology at Thomas Jefferson University, Philadelphia, United-States. Dr. Moster, who was also an Investigator in the RESCUE and REVERSE trials, added, “These findings emphasize the need for early diagnosis and potential gene therapy in these patients.” 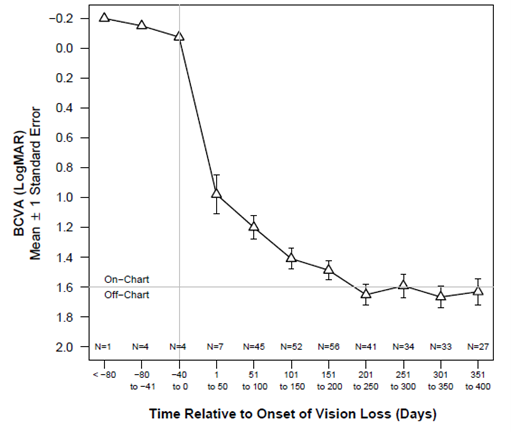 Figure 1. BCVA in untreated ND4-LHON patients as a function of duration of vision loss

The findings reinforce the medical consensus on the natural history of LHON over the first year post-vision loss, in which an acute phase of visual decline in the first months after onset is followed by a relative stabilization of visual acuity in the dynamic phase of the disease.a This pattern, in combination with the very low rate of spontaneous partial recovery of visual acuity in patients with the G1178A mutation and later onset (at 15 and over)b, suggests that ND4‑LHON patients matching the RESCUE and REVERSE populations have an acute need for therapeutic intervention.

The paper is available at https://journals.lww.com/jneuro-ophthalmology/Fulltext/2021/09000/Cross_Sectional_Analysis_of_Baseline_Visual.4.aspx .

23 Department of Ophthalmology, The University of Pittsburgh School of Medicine, Pittsburgh, USA